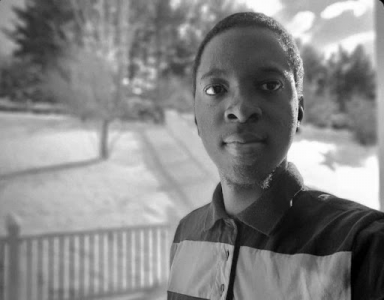 If you are a huge fan of American television series, then perhaps you are familiar with the series Modern Love, a rom-com anthology television series developed by John Carney, based on the weekly column of the same name published by The New York Times. Book-obsessed writer Ife Olatona recently published a personal essay titled “Singleness is Not a Stigma” in this weekly column. Ife has been writing actively since 2015, submitting to literary magazines in 2018, throwing his weight into honing his writing skill and hoping it becomes a concrete career path. He is a Best American Debut Short Stories nominee and was listed as one of the 5 under 22 emerging writers to watch, according to a feature piece for The Times in 2021. He won the Channels TV Book Club Prize for Literature and the AISEN fiction contest. His work has appeared in journals such as The Kalahari Review, The African Writers, The Transition Magazine, and most recently, The New York Times. I had an absorbing conversation with Ife on Instagram to glean how he fully maximises his creative writing depths.

I read your essay, “Singleness is Not a Stigma”, in New York Times, and it aroused several thoughts in me, the predominant one being, “My goodness, this man can write.” I love the seamless storytelling, the poignant expressions, and your tapping into the rawest part of you to write that essay. Please walk me through the process of penning that beautiful essay, the emotions, the writing, and the submission.

I wrote the essay during a spring break, about March this year, halfway through last semester at school, and the original title was A Strange Lover, A Stranger Me. I’d been thinking about how far away I was from home, loved and yet unloved in the romantic sense. I’d also just discovered the term “amatonormativity: the widespread assumption that everyone is better off in an exclusive, romantic, long-term coupled relationship”, coined by Elizabeth Brake. And so, the central thread to the piece was a sense of strangeness, of reckoning. I’d not thought of being in the New York Times, but I thought the Modern Love column might be a good fit, especially since it’s one of the few avenues open to unsolicited submissions. I sent the essay at 11:58 PM, just meeting the deadline and was surprisingly selected. After three rounds of edits, it was scheduled for publication. What excites me most is how that piece is now my most widely read piece and how new readers have discovered me.

It’s also special for me being my first published personal essay. To be open about personal interests in the New York Times was something I was nervous about. In earlier drafts, my focus had been irrelevant, more about the pressure to be in relationships rather than me. Some friends suggested I choose a more vulnerable path, sharing my experiences and perspectives, which perhaps worked. I’m stunned by the reception of the essay because I’d had a slight dissatisfaction upon rewrites: the New York Times Modern Love column had a word limit of about 1500 words, and having to be concise made me feel clipped in a sense, wanting to do as much as possible within a short space. Perhaps that’s good anyway: to write something brief, simple, and yet moving.

A February God is a story in which a child anthropomorphises God and questions the supposed sovereignty and immutability of godhood, the seeming contradictions afloat in religious circles. She defiantly imagines God to be a black woman, the point of which is not to insist that God is ideologically or theologically so or debate celestial existence but to explore the psychology of perception.

What inspired the story: I was watching a small drama group rehearsals, and they needed someone to play the character of God. And the director thought of a female who could play the role, to the protest of some crew folks who thought, “Why will a woman be God?” Someone else questioned the ideology of costuming God as a white man in a long spotless gown. I then thought of hegemonic masculinity and how religion can become a tool to vindicate male privilege. As for which is easier between fiction and nonfiction, both are tasking, especially because I’m more interested in writing out of emotion than academia.

How do you keep sane while exploring your creative depths as a writer in this constantly changing society? How do you shut out the noise and just write? I’m asking this because we writers sometimes let trends infiltrate our muse and just write what people want to read instead of writing what our soul requires.

I try as much as possible to write at my own pace and not worry about publishing trends or politics. Also, I try to stay out of literary Twitter banters.

I think it’s nice to engage with other readers/writers, but Twitter easily gets out of hand: trolling, pseudo-wokeness, trend-driven “hot” takes rather than nuanced and thoughtful conversations. Maybe Twitter is okay for broadcasts, but it easily becomes overwhelming/distracting.

I’m not entirely anti-social media, but there’s too much information at our fingertips. Social media is probably enticing to a writer because it is perhaps the most instantaneous mode of dissemination. But people go to social media for updates, not necessarily for expression. So yes, social media may be a useful auxiliary, but it’s not what makes up a writer. I’m learning to do away with the illusion that I need constant updates to communicate with the world. Why not just write?

I recently read a quote by Franz Kafka that says, “Don’t bend; don’t water it down; don’t try to make it logical; don’t edit your soul according to the fashion. Rather, follow your most intense obsessions mercilessly.” Do you see your writing as controversial, something that defies the norm and just sets its bar? Do you see it as something that doesn’t ‘bend’?

Interesting! Yes, I do. Although I’m not sure if I’ve met the borders of what I’d consider ‘controversial’, I strive towards work that defies the norm. In terms of following my most intense obsessions mercilessly, I’m particularly interested in style and imagery – they are basic aims for me. I’ve written well if I find a befitting style that does not reek of too much effort.

You have quite a few awards and writing achievements to your name. Which one came first, and how did it make you feel about your writing?

I started sending creative work out in 2018. Since then, I’ve been rejected about just 70 times or so. I recall starting off winning a mattress. I was in secondary school then, and I had represented my school in a writing competition & finished as a runner-up while the winners won hundreds of thousands of naira. Later that year, I won the Channels T.V Book Club Prize, which was the springboard for me, propelling my first T.V appearance and an all-expense-paid trip to the UAE. In 2019, I won the Foyle Young Poets Award – the world’s biggest teen poetry contest. Then in 2021, I was named a writer to watch by The Times U.K and had my first published short story in print in Transition Magazine (issue 130). The story got a PEN America Best Debut Short Stories nomination & I used it as a sample for the Morland Scholarship, an 18k pounds scholarship I later got shortlisted for. Then in 2022, my debut personal essay got published in the New York Times.

How does it make me feel: seen, affirmed. Stunned, even because I had not thought I’d be a writer professionally, it was the least ‘viable’ of career options, according to Nigerian uncles and aunts. Yet it’s happening, and I’m hopeful for the future.

You mentioned you’d received about 70 rejections. That’s a lot. How did/do you deal with rejections?

I expect it, knowing the odds of publication. It still hurts sometimes, but I try to make sure to have an idea of what is being published and send only my best. So for New York Times Modern Love, I had specifically read some previously published pieces and familiarised myself with their guidelines before ‘shooting the shot’.

Are you working on something right now? Can you share a bit about your work in progress, or are you like Chimamanda Adichie, who remains superstitious about sharing such things?

To be frank, my process is more of fumbling about before even having a distinct sense of what I’m ‘working’ on. There are a few short stories here and there, and hopefully, a collection of stories soon.

I have to ask this over-flogged question because I am genuinely curious: who is your literary role model, someone whose works you always go back to when you hit a block?

How does writing make you feel?

Happy and fulfilled when it goes well, distressed when it doesn’t. Discomfited while writing, dissociated when not writing, relieved when I’ve just written.

Recommend some books you think everyone should read.