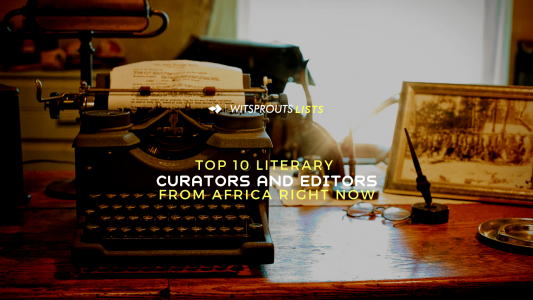 Certainly, there are many writers from Africa. Chimamanda Ngozi Adichie, Wole Soyinka, Noviolet Bulawayo, Ngugi Wa Thiongo are some of the well recognized and celebrated writers all over the world. It isn’t very hard to find a list of best writers and if you attempt to make a quick search right now, you will be flooded with plethora of African list of best writers. Unlike writers, it is often hard to find list of editors and curators who play essential roles in the creative process of every writer. Editors and literary curators alike create spaces and time to promote writers. Behind the scenes, they help writers achieve a better, and well-written version of their work. This list features some of the best literary editors and curators from Africa right now and it is important to note that most of these honorees are also writers. Here is a list of ten editors and curators from Africa who have tremendously contributed to African literary space in the last five years.

Born in Harare, Zimbabwe on 16 September 1966, Ellah is the founding Publishing Director of Indigo Press and Editor-at-Large at Canongate Books. She was on the judging panel of the 2017 Dublin International Literary Award and the 2015 Man Booker Prize. The former deputy editor of Granta magazine, she was senior editor at Jonathan Cape, Random House and assistant editor at Penguin. She was the editor of Africa39 (Bloomsbury, 2014) and the anthology, Safe House: Explorations in Creative Nonfiction (Dundurn/ Cassava Republic). She was also the founding publishing director of The Indigo Press. Now, Ellah is Editor-at-Large at Canongate books and the Chair of the Caine Prize for African Writing. She is also a senior research fellow at Manchester University, curating a series of literary events entitled The Complete Works. Ellah have also commissioned fiction for Audible and the BBC.

Born in Ibadan, Nigeria on 26 February 1974, Lola is the founder and Director of Ouida Books, a publishing outfit that has published the works of Hadiza El Rufai, Ayobami Adebayo and others. She lives in Lagos, Nigeria, where she curates an annual literary festival, Aké Arts and Book Festival. She is the founder and Director of Book Buzz Foundation, a non-governmental organization established in 2012 for the promotion of arts and culture within local and global spaces.

Otosirieze is deputy editor of Brittle Paper. He is a judge for the 2018/19 Gerald Kraak Prize and the 2019 Miles Morland Writing Scholarships. He is an editor at 14, Nigeria’s first queer art collective, which has published volumes including We Are Flowers (2017) and The Inward Gaze (2018). He is the curator of the Art Naija Series, a sequence of e-anthologies of writing and visual art focusing on different aspects of Nigerianness, including Enter Naija: The Book of Places (2016), which explores cities, and Work Naija: The Book of Vocations (2017), which explores professions.

Bibi Bakare-Yusuf is a publisher, based in Abuja, Nigeria. She started Cassava Republic Press in 2006. Her company is focused on publishing quality African writing at an affordable price. Cassava Republic is a social enterprise, driven by the dream to re-develop a reading (and writing) culture in Nigeria, as part of the bigger project of re-imagining Nigeria. She has said that stories carry great significance in culture and that narratives in books give shape to the people they represent as they find voices like their own in their country’s literature. She has articulated this in a TEDx talk titled Diversifying the Voices of African Literature. Bakare-Yusuf has won several awards for her disruptive work in publishing, including one by the International Excellence Awards 2018 in conjunction with The Publishers Association in London for Inclusivity in Publishing and the Brittle Papers African Literary Person of the Year.

Born February 14th, 1995 in Kogi State, Nigeria, Basit Jamiu is the founding editor of Afro Anthology Series, a literary platform that primarily focuses on improving the status of Creative Nonfiction in Africa. He curated Selves, an anthology of Creative Nonfiction by young African writers in 2017. In 2019, he was a one of the judges of Hamza ElRufai Short Story Prize organised by Yasmin El Rufai Foundation. He is one of the honorees of YNaija 2018 New Establishment List in recognition of his role as editor.

Bwesigye bwa Mwesigire is a Ugandan writer and lawyer, and the co-founder of the Centre for African Cultural Excellence (CACE), the organisation that curates the pan-African Writivism literary initiative. His work has appeared in literary journals, anthologies and academic publications, including the Chimurenga Chronic, Uganda Modern Literary Digest, Saraba magazine, New Black Magazine, AFLA Quarterly, the Kalahari Review, Short Story Day Africa, The Guardian, The World To Come and African Roar, among others. He is a regular contributor to the Africa-focused blogs: This is Africa and Africa in Words . In 2015 he was recognised by the Harry Frank Guggenheim Foundation as a Young African Scholar and selected for the prestigious African Leadership Centre Peace and Security Fellowship for African scholars at King’s College, London.

Ainehi Edoro is a Nigerian writer. She is the founder and publisher of the African literary blog Brittle Paper. In 2016, her writings were published in British newspaper The Guardian, where she observed discrimination in the perception of African writers by some stakeholders in the literary circle. In June 2018, she was the lead judge at GTBank’s writing contest. She is also the announcer of the African literary person of the year through Brittle Paper.

Margaret Busby is a Ghanaian-born publisher, editor, writer and broadcaster, resident in the UK. She was Britain’s youngest and first black woman book publisher when in the 1960s she co-founded with Clive Allison the London-based publishing house Allison and Busby (A & B). She edited the anthology Daughters of Africa (1992), and its 2019 follow-up New Daughters of Africa. She is a recipient of the Benson Medal from the Royal Society of Literature.

Helen Moffett is a poet, freelance editor, academic and feminist activist. She has a PhD from the University of Cape Town, was a President’s Fellow at Princeton University, and has held post-doctoral fellowships at Mount Holyoke College, Emory University and UCT’s African Gender Institute. She has lectured as far afield as Trinidad and Alaska, but calls Cape Town home. Her publications include university textbooks, a treasury of landscape writings, Lovely Beyond Any Singing, a cricket book (The Art and Science of Cricket, with the late Bob Woolmer and Tim Noakes), an animal charity anthology (Stray, with Diane Awerbuck) and the Girl Walks In erotica series (with Sarah Lotz and Paige Nick under the nom de plume Helena S. Paige). She has published two poetry collections – Strange Fruit (Modjaji Books) and Prunings (uHlanga Press). Recent projects include the Short Story Day Africa anthology, Migrations, and a memoir of Rape Crisis.

Billy Kahora is a Kenyan writer and editor based in Nairobi. Billy Kahora studied Creative Writing as a Chevening Scholar at the University of Edinburgh in 2007. Before that, he spent eight years studying and working in South Africa, and was Editorial Assistant for All Africa.com in Washington D.C. He also has degrees in journalism and media studies. Kahora now lives and works in Kenya, where he is Managing Editor of the literary journal Kwani , established in Nairobi in 2003