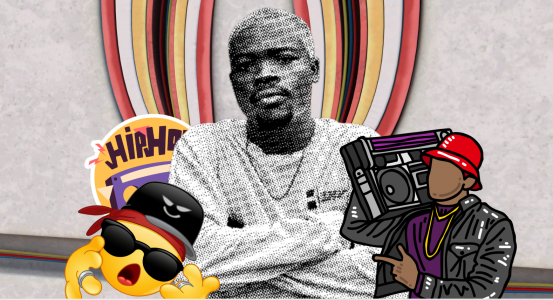 Adekeye Emmanuel Ibukunoluwa, a graduate of the Performing Arts department of the University of Ilorin, artistically known as Olunweke, is an upcoming Nigerian artist. He hails from Omu Aran, Kwara state, born and brought up in Alapere, Ketu, Lagos.

When Olunweke is not dabbling in scenic designs and construction, he is making a rave with his ‘Lamba rap’. Lamba is a Yoruba slang term for dancing and partying, and Olunweke is fulfilling his part in this art. It is a type of music that usually has a fast rhythm in which words are spoken instead of sung.

He is socially active on Instagram, and his songs are on various platforms such as Audiomack and SoundCloud.

He tells us about how his journey into the music industry has been so far.

What inspired your interest in music?

I was inspired by the music I listen to and how hip-hop artists (s) tell stories with rap. I also love how rappers excite themselves with their music. If you are a lover of hip-hop music, you will surely notice that almost all rappers have no less than a track for themselves -to prove themselves and tell people what they are capable of doing. E.g. Olamide’s Eyan Mayweather, CDG’s Ibile Mugabe and Reminisce’s OGB4IG. I also have one titled Who’s the Best Rapper, which will be out very soon.

How would you describe your music?

I am a hip-hop artist and an indigenous rapper. I tell stories and also correct the ills of society with my music.

What is it about music that makes you feel passionate?

I believe music will surely take me around the world, and I will preach my sound. Music is what I have had a passion for from way back, and I’m always happy when I do it.

What is the story behind your stage name?

Nweke is what I love to say a lot, and people started calling me Nweke, so I just added Olu to it.

Do you create music for yourself or your fans?

I am a fan of my craft; I create music for my fans. Most of the time, when I drop freestyle, it’s always based on popular demand. Either a music cover that’s trending or issues that are trending in the community. For instance, I dropped “Soro Soke” in 2020 during the End Sars protest because of what was happening in the country then.

Could you describe your creative process?

I am always creative when alone, especially walking along the road alone. What I see and think to push me to pen something down.

What is the biggest challenge you have encountered since entering the music industry?

My biggest challenge was discovering I was scammed in a musical competition I put my all into. It was an online competition, and we were given a chance to do a video of us singing or rapping for a minute. We were to post it online before joining the competition, and we also had to get our fans to vote for us, which I did. In the long run, I was part of the top 10 and finally emerged as the winner. But, at the end of the day, I found out that they scammed me, and it made me waver in retrospect to putting my energy and time into something that ended up being a hoax. I had to build the courage to put myself back out there.

What would you say sets you apart from other musicians in your genre of music?

Yeah, I’m a rapper. I respect every rapper in the game and all hip-hop fans. Playing with words, punchlines and rhymes is not an easy task, but we have to put all this together. I believe in my way of delivering bars and my storytelling style. I also do Lamba rap. People call it dance hall, but I call mine Lamba rap.