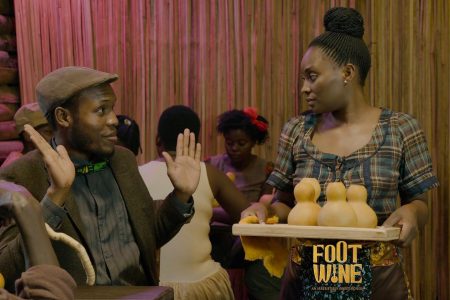 April’s here, and a month-long of spiritual exercise with it too. Ramadan Kareem 🌙 to our Muslim brothers and sisters. Asides from the benefits of the spiritual sprint, fasting offers a lot of health and mental benefits too. I plan to take a few days to fast and reflect too. What are your plans for April? And have you listened to Hayya Hayya, the FIFA official soundtrack for the 2022 World Cup. It has Africa’s sensational Afropop star Davido on it too!

Here’s what we’ve been up to this week:

Emotions and Intrigue with Khaysie Tiburcio

If you’re one for the kind of art that breaks out of the colour wheel or believe that art helps you communicate your emotions, then you might want to check out Khaysie Tiburcio, one of the youngest emerging artists there probably are, and she’s from Florida. One of her pieces, Art Within Their Souls, was featured on billboards in Southwest Florida last year during Arts Art Lives 2021 Alliance. In an interview with Artplugged, she discusses how her creative processes begin with brush strokes, leading her down paths in many different directions. Part of her painting style, she reveals, is to paint with vivid elements, only to scrub them off with her paint rag, revealing an entirely new painting. And for her, it’s the most exciting part of the process. Taking a look at some of her works, the scrub off is quite obvious, which leaves me thinking about what it could’ve been if it wasn’t scrubbed off. She strongly believes that artists have a role in society and that is expression. Expression inspires and impacts the viewers, thereby invoking change. Khaysie leaves me asking if the scrubs on her painting are a glimpse of what emotions look like if they ever got up on a surface. You can read up on the rest of the interview.

The visual explorations of Ingrid Pollard

Do you believe objects are just objects? Paper is just paper or does it have a story to tell? Well, if you think things are just things, Ingrid Pollard has something else in mind. She’s spent the bulk of her career with the belief that objects carry stories and she’s told quite a number of them. She combines photography with printmaking, text, found objects, video and audio. Her scope is multidisciplinary and she’s been a gardener, zoo worker, dyslexic and cleaner in her 3 scores of being alive. She has interrogated the power and physicality of her photographs and explored the representation of the Black figure in British life. She’s been more into interacting and connecting directly to local communities, and she’s not exactly big on blinding(lime)lights, even as her profile continues to expand. She believes that we rise by lifting others and has 4 decades of multilinked disciplines to show for it. You can have a full read of Ingrid’s article here.

Achiampong launched the Relic Traveller: Phase 1 project, which is built upon a postcolonial perspective informed by technology, agency and the body, and narratives of migration, it also visits the trauma of living in the body at the wrong place and time. Not so much had changed for him though. Achiampong discusses his everyday life with Elephant; the strains of being an artist, revealing how little of a commercial artist he is, a partnership with a gallery that long-neglected black artists and so much more, but his mind is set on building a legacy for the Black kids after him, especially for the ones that have been failed by government and society. He believes that it isn’t about him anymore. You can read all of it here.

Samuel Ross Is Making A Difference

The Creative scene in London saw itself experiencing the latest instalment of the Open to Change series organised by Dazed and Converse. The event took place towards the end of March and it saw the likes of British fashion designer, creative director and founder of A Cold Wall, Samuel Ross takes on entrepreneurship mentorship sessions with the participants. The aim was to improve the collaboration and communication of these individuals in person, because they hit, well, differently. Ross would see himself with 8 young creatives under his wing from across different creative fields, guiding them on problem-solving and how to make their crafts into successful businesses. Ross’s interest lay in the field of good design, regardless of the field, and he also emphasised that creatives should strive to offer solutions to better everyday lives.

“To know how much there is to know is the beginning of learning to live.”

-Dorothy West (The Richer, the Poorer)

Jump into the Gram