Opeyemi Olukotun captures human emotions and society in his paintings 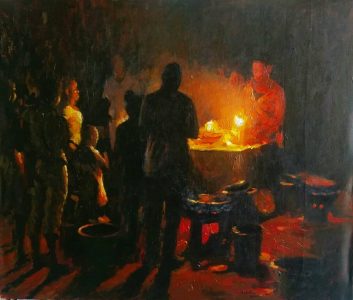 We sat down with Opeyemi Olukotun as part of The Creative Lane, a series of features in which we set the stage for creative people of colour all over the planet, guided by question prompts but not interrupted by word counts or time limits, letting them share personal stories and lessons in the purest, truthful, and most inspiring form.

Opeyemi Olukotun‘s discovery of his artistic capability was quite accidental. It happened as a response to an academic shortcoming as a kid. His first drawing was of his brother. His father’s reception of the newly discovered skill helped to strengthen his creative footing. Over the years, having studied fine and applied arts at the university and interned under the nation’s top art mentors, Opeyemi has exhibited works at various shows, sold hundreds of art pieces, and now mentors upcoming artists as an instructor at the Universal Studios of Arts in Lagos. Here, he walks The Moveee through his creative journey, focusing on the early beginning and how he’s navigated the tide since then.

When I was in primary school, in a class of 16 pupils, I once came out ninth at the end-of-term examination. My dad flogged the hell out of me. Some days after that, I picked up my pen and started sketching a picture of my brother, and it came out nice. My father saw it and was amazed. I didn’t even know I could draw until that moment. That marked the beginning for me. Throughout my secondary school days, I didn’t do anything related to art. I was a science student, and in 2006 I got admission into Ladoke Akintola University of Technology to study Pure and Applied Chemistry. I was not a fan of Chemistry, and I am sure that if I had stayed in that department, I wouldn’t have graduated with a good enough result.

My initial interest was to study Computer Engineering or Architecture, and those were my desired courses, but I was randomly given admission for Pure and Applied Chemistry. Usually, at the 100 level, every student takes the same set of courses. So during that time, there’s this particular course called FAA 101. I don’t understand how a technology school decided to have an art department. Maybe it was just for my good. So one day, I went to get the kit for the FAA 101 course from the department, and I saw the senior art students gathered around a model trying to draw her, and I told the friend I was with, “Do you know I draw and I would love to be a part of this?” I was amazed by how they sat down, feeling themselves as they drew.

The plan I had with my dad was to change from pure and applied chemistry, in my sophomore year, to computer engineering or physics, but I did not end up doing that. Neither my dad nor anyone at home was informed that I would cross to the fine art department instead. Three months after I got into the fine art department, I informed him, and he wasn’t happy with me, but I was extremely happy in the new department. This was how my professional art journey began. It was crazy because I was a social person who loved to play games and engage in other social activities. But when I went into the art department, there were so many assignments to do that I missed out on most of my social life, yet I ultimately enjoyed the experience.

What improved my skill was when I went to do my Industrial Training at the Universal Studios of Art. That’s where many of the prominent Nigerian artists practice. When I got there, my approach to drawing and painting changed, and I learned a lot about the art market and other important topics. I went back to school loaded with new skills.

After my NYSC programme in 2014, I didn’t want to come back to Lagos. I wanted to stay somewhere far away so that I could have a peaceful life away from the craziness of Lagos. So I moved to Abuja, where I met and spoke to Mr Mufu Onifade, who took me to a place called Art and Craft in Zone 4, Abuja. It’s an art marketplace where I was able to work and sell, but the money I was making from the sales was so small. Being the firstborn of 4 children, I needed to seek alternatives quickly. So I got a teaching job at a private school. I did it for a while, learned from the experience, and gained teaching experience, but it made me slow down in my art practice.

I realized that some of the artists we started together at Art and Craft were already living fine. Over the years, they’ve been able to carve a client base for themselves, which they capitalize on, and at the time, my salary was beginning to irritate me. Sometimes, I exhaust the salary within a few days of receiving it. I needed to restrategize. So I left everything I had in Abuja and decided to move back to Lagos in 2016.

I got back into and started practising art full-time in February 2017. I decided to obtain an internship form from the Universal Studios of Art, where I initially did my Industrial Training. I applied because I wanted to be around people who have been practising for years. I knew I was pretty good, but I wanted an environment that would push me beyond any reason to leave the art scene again.

When I called my price to the person who bought my first work at the studio, he objected that he couldn’t pay that much because he did not know me. I started learning and evolving at the studio. The fact that many experienced artists are available as inspiration helped kick start a solid art career. Under Mr Abiodun Olaku, my internship lasted for two years. At the moment. I’m one of the instructors teaching students, especially Industrial Trainees, at the studio. We have very important courses including ones about understanding the business of art and there’s another training on how the art market works. The Universal Studios of Art is a great learning ground for anyone willing to put in the work and is passionate about art.

My greatest fear was at a point two years ago when my wife was pregnant around a time when I was experiencing low sales of my work. We were expecting a child, there was the pandemic, and I was not making much from art. I did not want to seek solutions outside of art, so I was motivated to put more effort into my work. I was also inspired to diversify my creativity. At the time, I learned to start painting works that appeal not just to me but also to the sensibility and expectations of the audience.

I have been working on several series intended to capture the Lagos hustle spirit. The bikers series, for example, attempts to capture the emotions and realities of Lagos bike men. This category of people is embedded deeply in the city’s demographics. Then there is the agbero and the night series where I capture market women in places like mushin. These market women set up shop in the freely available spaces in the street because they cannot afford actual shop rent.

Recently, I paint portrait faces, but my face paintings are intended to pass deeper meanings than regular portraits. I am fascinated by the human face, and the amazing topography, and I want to explore it in colours and strokes. I notice that these faces speak to people more than in my previous works. Probably because of the elements I employ in the works. I ensure that the faces I paint represent the people I intend to paint. When I paint the face of a soldier, for example, it must look and feel like a soldier’s face, not like a farmer’s face. I ensure to pay attention to what differentiates human faces based on their lived experiences. Consequently, I’ve been selling more portraits recently.

My work is unique in the way I apply and harmonize my colour. I don’t jump off colours, but ensure I stick with a colour pattern till I finish the piece. Sometimes, people say it is monotonous but this is the element that differentiates my work. Ultimately, I ensure to put myself and my soul in my art.

I am on a journey and I am very excited about the future as I improve my craft and learn new ways to capture human emotions in my works.