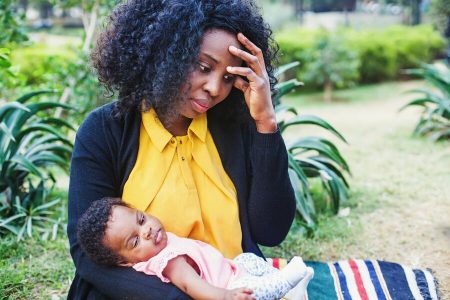 My big sister welcomed her first child on a beautiful, bright Saturday morning.

Awake, she lies gently in her crib. Her mother sprawls on the bed on the other side of the room. My mother sits beside her as they chat. As is the tradition, she has come to help her take care of the newborn.

The baby’s fingers wrap gently around my thumb as I lift her from the crib and look into her eyes. She looked so beautiful and innocent. She makes musical noises, indicating that she needs her mother. I bet her voice could knock out Lady Gaga in a singing contest.

She is perfect. My sister and my mother think so, too. While the baby suckles at her mother’s breast, I watch the older ladies beam from ear to ear, talking about how much of a delight the baby was.

My sister won’t stop talking about her child, who took her time before coming to grace us with her presence. Suddenly, she faces me and says, “One day, you’ll have a beautiful child just like this.” I smile, but my mind does not falter. I know childbirth is not for me.

I had seen how she struggled to have that child, from miscarriages to fertility issues. I want none of that. I resolved that I wanted nothing to do with baby-making.

Nine years later, that beautiful baby has grown into the most intelligent, proud, and sassiest child I’ve ever seen. Charming. Her wit and humorous personality draw you to her. She’s such a ray of sunshine. Amid a storm, you can always count on her to be calm. Atypical of a child her age, she has the right words to make you smile.

Whenever she comes to my parents for the holidays, I always make sure we bond better than before. I do things with her as she pleases, creating memories that last a lifetime. By the time I’m long gone, I want her to remember me as the aunt who was her biggest fan and supporter.

You might have read to this point and wondered why I am apathetic to motherhood. That’s because, while I’m willing to be the best aunt, I’m not willing or able to do the same for a child that would come out of me. I know being a mother entails a lot more than I can possibly give.

When I told my mum that I did not want children, she was taken aback and said she felt like she had failed me and didn’t do an excellent job of instilling motherly instincts. The statement struck me as odd. I told her, right there and then, that my apathy toward motherhood had nothing to do with her. From what I’ve heard and personal questions I’ve asked myself over the years, that conclusion would come sooner or later.

Amid all the confusion, she asked, “Why would you not want children when you’re very good with kids?” I already have a perfect answer to the question because I anticipated it all along. “Your perception of my relationship with children is not enough assurance for me,” I told her. “Many more factors go into raising a child, which I lack.”

My mother—and quite frankly, everyone around me—thought that my love for children would drive me to be the biggest supporter of motherhood and that my parenting skills would be top-notch. They could not have been more wrong.

Sure, I have a healthy relationship with my niece. We’ve developed such a beautiful relationship that you’ll see the love ooze off us like melted wax. But that’s all there is to my affection. I’ve always known that my care for other children did not translate into maternal instincts, and this is in no way due to a traumatic experience or my mother’s fault.

While having this conversation with my mother, I recalled an earlier conversation with my sister shortly after she had her first child. A year had passed, and she had started to see how hard it was to raise a child. After the initial excitement died, she suffered from postpartum depression for a while. She lamented how she had given up her life for her child—shoving things she had planned to do under the bus for the sake of her daughter. That, itself, struck a chord in me. I cannot give up my life for the sake of another. I know my sister loves her daughter to death without a doubt, but seeing her raving butterfly talk about the downsides of motherhood just gave me more reasons to back up my apathy.

Society still uses motherhood to describe the perfect transition from girlhood to womanhood. Apathy for it would mean one of two things to people. It’s either infertility or a raging baby-hating feminist. I’m a hundred per cent sure I’m neither (cue a laugh track). Still, the apparent myopic views of people on the meaning of femininity are reduced to submission and reproduction, making conversations like this difficult to have.

We, however, cannot avoid these conversations because they raise essential topics for discourse, especially topics that help open people’s minds to the meaning of femininity and liberation from the ever-demeaning views of a patriarchal society.

At a very young age, I concluded that I did not want children of my own. Contrary to popular argument, this decision did not come because I was scared of motherhood. It came about because of the brave person in me, asking the right questions and challenging the stereotypes.

In my mind’s eye, I view kids as precious items that require great care and attention, two things I find hard to give. I know if I ever brought a child into the world, I’d be responsible for it for the rest of my life. That sounds like a frighteningly long time to be accountable for anything (cue the laugh track, again).

These reasons might seem minuscule, but they all add up in a way that solidifies my apathy for motherhood.

As a person with many emotional issues from which I need to heal, my heart cannot stand transferring all that baggage to a poor child.

My career is as important to me as anything, and I do not think I can let anything come in between that budding career and me.

My body has also shown me signs that it would not be able to handle a child, and I have to respect and acknowledge that.

Ultimately, my heart is frail, and my body is weak.

Now tell me, dear reader, if my body is found wanting and my heart is still healing, why would I want to bring a child into my life? Would I, a well-meaning individual, subject a child to bear the brunt of my fear and issues?

These questions have lingered in my mind for as long as possible, and I have tried to answer them to the best of my abilities, but no answer I give myself assures me that I would make a great parent. That in itself is the answer I need.

Do not get me wrong. Children are beautiful creatures, and people who decide to have them are incredible. But do I personally have what it takes to raise a child? No. Would I give up my life for a child? No. As nonsensical as these questions may seem, they need to be asked as they continue to challenge and eventually affirm my stance on parenthood.

I’ve always thought that people with kids—especially a handful—have them because they intend to depend on them in the future. They want their children to serve as a retirement plan,  something they can bank on when they are old, a potential source of care and income. I’ve seen this destroy so many relationships between a parent and child. The parent with this ideology would be shocked, angry, and disappointed when the child takes a contrasting stance. On the other hand, the child is left with trauma from the parents’ appalling approach to parenthood, opening the door for generational trauma.

A big reason why this conversation is worth having is that people who have kids do so because they feel a sense of obligation. In predominantly patriarchal societies, not having children is considered disrespectful towards your parents. They say it feels like you’re robbing your parents of the joy of being grandparents.

This ideology is inherently problematic. It reveals why grown people continue to ride on the coattails of the approval of their parents, which isn’t bad in some cases, as their advice and consent sometimes help us make good decisions. It does give you a sense of peace when your parents support something you do. However, it is intrinsically wrong to create another human solely because of your parents’ advice and desire. It is best to listen to yourself in cases with life-altering effects.

Having children based on parental influences only sets you, the prospective parent, into trouble with your child. Not only do you have the child because of the pressure from your parents and society, but you also have that child outside of your good graces. That, dear reader, would only lead to you mounting that same pressure on your child that leads to resentment.

I believe people who want children should question whether they genuinely wish to have children or want them because of society. I want them to understand that choosing to remain childless is not due to infertility or some left-wing radicalisation. People are simply beginning to open up to questions and scrutiny.

I also want to address the way people keep telling me that I’d come to change my decision. I made this decision when I was younger for solid reasons that would never change. I can assure you that people who decide to remain childless will not die of loneliness.

A woman’s body has been reduced to a country where everybody decides what to do with it without the woman’s input. If I genuinely own my body, I should be able to make decisions for it. As the saying goes, “my body, my choice.”

After a long talk with my mom that fateful day, my apathy remained strong as ever. And for those who still need a reminder of my stance on motherhood, “No thanks, I’d pass on it.”