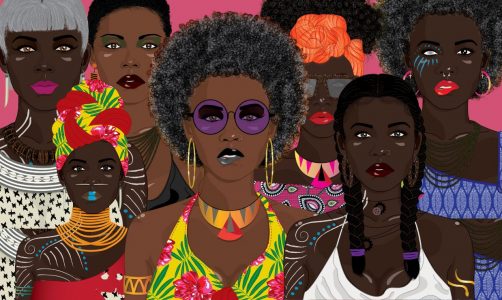 The world has seen a surge in the adoption of digital artworks via the not-so-new NFT medium, and we’ve been following the trend and frenzy of this new technology. In light of this recent development, we launched the NFT Radar, a new series featuring artists putting out amazing works in the NFT space. From new but noteworthy NFT listings to sold-out listings, we dive deep with the artists behind these works into the world of digital art, discussing their work process, the significance of their art, and the secrets they knew or wish to know.

Force of Africa is an artist collective that wants the world to see the African story from a female perspective, which is interestingly unusual. The collective is out to raise the bar of African participation in the NFT space, but that’s not the only thing they’re after. Find out more as we delve into their plan for the NFT and Web3 spaces.

How would you explain NFTs to a rookie?

What if Leonardo da Vinci had created the Mona Lisa on his computer? The original would only exist digitally since it never was brought to paper. It would be a file sitting on his PC that could easily be duplicated, and no one would ever know which the original version is. With digital art becoming more and more common, it is necessary to come up with a way to authenticate it, be able to trace an image back to the artist and guarantee value through a safe environment. This is exactly where NFTs come into play. Through blockchain technology, we can tokenise each image and attach it to a digital contract (smart contract) that is directly linked to the Force of Africa Project and can’t be falsified. Even after being sold multiple times, anybody will always be able to see where the image had its origins.

What’s unique about the Force of Africa project?

The Force of Africa project stands out from other projects in many ways, and to answer this question, we have to break down the scope of NFT projects and look into them individually. NFT projects generally consist of art, utility, and roadmap. Often at times, it is the case that projects have low-quality art and try to make up for it by promising very fancy utility, like staking, in-game usage, NFT transformations, etc. The problem with that is that 99.9% of the project fail to deliver on their promises and end up failing and damaging the market. This is where the Force of Africa carves its difference. It was always our intention to invest a high amount of time into the quality of our art and deliver something to the community that stands out on a visual level. When we look at our utility, we opted for a very tangible approach as well as a very low risk of failure, guaranteeing our community that we will be around for a long time. We focus on real-life utility, by using our art as leverage to impact the overall development of blockchain technology in Africa and building a community around that movement.

Additionally, we transform our NFT into the utility of the project itself since it was designed to be used as a profile image of our community members and, therefore, as a signal to the world that that person supports the movement. When we talk about the roadmap, we stay consistent with the course and promise benefits to the community that we can make happen. From a community point of view, our roadmap is and always will be centred around the art and our representation of the African culture which, of course, goes beyond the strong women. Family is one of the most important elements so, we will be following up with a male collection as well as a toddler collection to bring them all together. Each new collection will bring certain benefits to our holders. Just to give an example. If you already possess a female portrait as well as a male portrait, the toddler will be acquirable for free. For us, it is all about purpose. We want to positively impact the real world through our art and build a community around it that allows us to make it happen.

What is your future outlook?

NFT is a new technology, and we are just starting to understand the diverse range of applications, but the outlook is very promising. We imagine a virtual world in which NFTs can be displayed in your virtual homes, used on avatars, and granted access to exclusive spaces. A virtual store in which you can try products and place orders directly.

All of this might still be abstract to many people, and soon the discussion will start to develop around the storage of documents, such as educational and property claims, IDs, Drivers Licenses, etc. All of which will be hosted on the blockchain in the form of an NFT, making the process transparent and completely safe.

As a team, we are excited about all the developments happening around NFTs, and of course, especially about the launch of Force of Africa which is our long term project, as it contains multiple phases and will continue to develop over the years to come. Additionally, we are constantly increasing our expertise around blockchain technology to support organisations (private and governmental) in adopting the technology within their business model.

What specifically brought you together as a collective to begin this NFT journey?

We are a team of blockchain enthusiasts and have been active within the NFT community for quite some time. As we got to see more and more projects launch, we couldn’t avoid noticing a clear lack of African representation within the market. The scope of projects that existed up to this point was, to a broad extent, centred around portraits, but none had managed to embody the beauty, colour, and strength of the African culture, nor come directly from local artists. Whilst this is a worrying indicator by itself, it sparked a way deeper concern within the team. Blockchain Technology extends beyond NFTs, having far-reaching applications that will shape societies for the years to come. Seeing that African NFT activity was below the average made us look into the adoption rate of the overall blockchain technology within Africa, which unsurprisingly was similar to what we had witnessed within the NFT community. Blockchain Technology can tackle many of Africa’s biggest challenges, ranging from financial instability to corruption, and even identity theft, making Africa the continent that can benefit the most from this innovation. It now needs to be a collective effort to raise awareness around those capabilities, make education accessible, and build the necessary infrastructure to make use of the Blockchain. As a project, our objective is two-fold. We want to represent the African culture through our art and repurpose the revenue to support local organisations in preparing Africa for the upcoming web3 revolution.

What has the creative process for the project been like?

As our art is culture-driven, the initial phase of the development was very much focused on the research of tradition, trends, and fashion from the different regions within Africa. We invested a significant amount of time into this process as we wanted to represent as much culture as possible within the collection. Once we had mapped out all the different aspects, the actual creative process could begin. As our art is composed of different layers (called traits), which will be mixed through our algorithm in the final collection, it is important to keep a clear overview of what has been developed already. To do so, we tackled each cultural character at a time, always drawing complete sets of matching traits. The artistic process went on for three months until we arrived at a point in which we could say that we were in a good state to make the public announcement. At this point, we had developed 521 traits that will make up the full collection of the Force of Africa Project.

What message do you think your NFT would pass to its audience and eventual collectors?

The NFTs of our first collection celebrate the African culture’s beauty, strength, and kindness from a female perspective. Through our art, we aim to represent every woman from the continent and tell their stories to our audience. Each of the 5555 pieces of art is unique and intended to be interpreted by the viewer in its way, depending on their personal history. It is also no coincidence that our art is shaped to function as a profile image. It stands for a blockchain savvy Africa and, when used, signals to the community that the person stands with the values and mission of the Force of Africa Project.

As a team, what is your typical work day like?

We all work full-time jobs next to managing the Force of Africa Project, and at the beginning of our journey, we didn’t know the intensity at which the project would develop. Within our team, everyone is responsible for a certain aspect relevant to the efficient functioning of the project. Ranging from software development to marketing, public relations, design and, of course, the art. Through a constantly open communication channel, we stay in touch throughout the day and discuss topics as they come up. Every weekend we host a collective meeting to go through the project in detail and strategise on the way forward. We aim to dedicate ourselves fully to the project and hope to achieve this as we continuously launch new collections and establish ourselves within the blockchain.