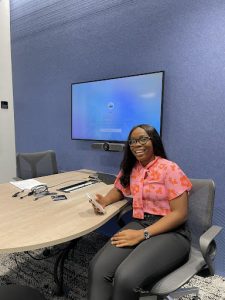 Chisom C. Nwokwu is a fast rising female in the tech space. She interned at the bank of America in 2021 whilst she was in her final year at the University of Nigeria, Nsukka. She built an android app with over a thousand downloads and has been a part of numerous volunteer programs that help newbies in tech. She is currently working at Microsoft as a software developer.

How does it feel to work at Microsoft?

It feels good working at a big tech firm. It’s a lot better than working at a startup because of the workload that comes with it. The workload is being shared amongst many people, which reduces pressure on me or anyone in the company.

At Microsoft, I work virtually and on-site. Every Thursday, we meet at the office cafeteria to catch up. It’s so much fun. We get to play games in the game room.

I also love that everyone is helpful regardless of their team or position in the company. The best part for me is building connections with other people in the industry through fun events and workshops.

Are there Microsoft programs that help beginners in tech build or hone different skills in tech?

Yes, there are a lot of programs. We just concluded a six weeks workshop with the National Association of Computer Science Students(NACOSS). We taught students in various universities about data structure and algorithms and how to apply for roles in Microsoft.

Have you ever experienced any form of toxicity or harassment from your manager or coworkers?

There was this day I was sitting casually with my friend. I hadn’t met the Managing Director then as I was still new to Microsoft. He casually walked past us with his face mask, sneakers, and laptop. You know, tech bro vibes.

What inspired you to build a career in tech?

As a computer science student, I had an introductory programming course where normal pseudocodes were used. I failed that course and retook the exams the following semester. All I had was a textbook with all the mumbo jumbo code written in it, and I had no idea what it meant. That aside, that same year (2018), I attended my first tech meetup, the Women Tech Makers Event held at school. It was led by Ifunanya Ikemma and Judith Nwokike, two beautiful and talented young ladies. At the end of the event, I spoke to each of them, and they both advised me to always stand out as a lady in the tech space and learn new skills. The second event I attended was the GitHub Universe Extended event, also hosted on campus.

After, every dot of curiosity and zeal in my life started connecting.

What advice would you give to anyone starting a career in tech?

My advice has always been to stay consistent in learning and practising. I have a 1:1 coaching session where I get to talk with people on how to get started, build a tech career, and land a job in a big tech company like Microsoft.

Landing a job in a big tech firm isn’t as hard as you think. I’m glad I put in the work and kept showing up even though I felt like giving up sometimes.