The Aftermath of War: A Review of Rasaq Malik Gbolahan’s “No Home In This Land” 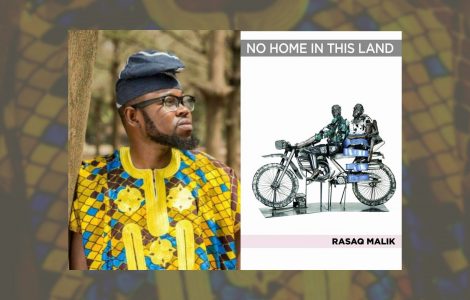 A famous Yoruba parlance states, “War, even in its smallest form, isn’t a feast of pounded yam or cornmeal; it is, in fact, unlike copulating with your wife in the cosy condition of your matrimonial home.” No matter how little, war is not an enjoyable situation. There is never anything little about war.

War is perceived similarly all over the world. All civilisations have had war in their history. Without mincing words, war has been in existence since time immemorial.

The genesis of war is the sprouting of conflicts between two countries, tribes, or sizable groups. War costs a lot, leaves ruins and creates distance. It is a difficult situation.

There’s a need to bring the discussion of war to the table, and one of the avenues in executing that is through literature. There are many faces known in the literary scene. One of such faces and arguably the mother to other faces is poetry, and it is precisely what Rasaq Malik uses as his creative tool to spell out what war looks like and what it leaves behind in his debut, no home in this land.

There’s no war without a trigger, a cause, or perpetrators. In Rasaq’s chapbook, away from our TV screen and the news on radios, the poet points out a sizable but deadly group called Boko Haram as the perpetrators of war in the northeastern part of Nigeria, most especially Borno. According to Counter Terrorism Guide, Boko Haram is a Nigeria-based group that seeks to overthrow the current Nigerian Government and replace it with a regime based on Islamic law. It is popularly known in Nigerian and Western media as “Boko Haram,” which means “Western education is forbidden” (the word Boko is a holdover from the English colonial word for a book)

They brought war to northeastern Nigeria, and what do they leave behind? Rasaq writes in, night after night;

“The villagers huddle in a room where the memories of people displaced by war are dusty photographs on a table, names of lost beloveds scrawled on the walls. The villagers gather to burn candles and inhale bloodied air emanating from the bodies of people bombed in the streets of Gwoza; bodies waiting for coffins in Goshe; bodies in undisclosed graves. The villagers mourn their relatives whose names the radio will not pronounce, the people whose minds are traumatised by war,”

Towards the poem’s end, Rasaq makes the war monger’s name evident. He writes, “The dead replaced with flowers in villages ransacked by Boko harams, the faint voices of people groaning beneath the debris.”

One then asks if these warmongers are indeed the face of the Islamic law they want to establish in the stead of Nigeria’s constitution. Rasaq takes us through the journey of what it means to be the face of Islam and what it means to worship Allah away from the extremism and the insensitivity of this group towards human lives and properties. He writes in How to Worship Allah, “This is how we pray without screaming curses on the heads of those who do not believe in Allah, without spilling blood on the earth for the sake of Allah that does not demand that we decorate the sky with bullets. This is how we worship our God as Muslims.”

“How we supplicate to Him without burning churches, without bombing houses, without desecrating the holy Qur’an, without leaving towns and cities as ashes washed away by the flood of tears. This is how we worship Allah without converting the earth into a cemetery, without splattering blood on the walls of desolate houses, without setting fire to huts and villages in Borno, Maiduguri, Jos, Kano, Kaduna, in places all over the world.”

Also, these marauders leave elegy to the mouth of Nigerians to sing for the Nigerian soldiers who lost their lives in the war against Boko haram, especially a referenced colonel in the chapbook (No Home in this Land). Bigoa, in Birthwater, says “To fathers who hold guns in their hands but will never hold their children, legacy does not fill the gap.”— this is related to what Rasaq tries to educate us on in the elegy for Abu Ali. He writes,

“Your country will remember you as a young Nigerian man, a father of a girl who will one day crave to see the tomb of her father, the breadwinner of a family who will not find peace in your tragic departure.

Your wife will remember you as a testament of grief that continues to ravage her tender heart.”

Rasaq’s lines mentioned above corroborate Bigoa’s line of legacy. It means that even though colonel Abu Ali, who also symbolises every soldier lost in the Boko haram war, left a worthy legacy, their families are forever traumatised.

The war caused by this insurgency brought about the intervention of the United Nations High Commissioner for Refugees (UNHCR), whose aim is to provide shelter, healthcare, and other livelihood support for the internally displaced persons, most of them women and children who Rasaq explores their struggles in, At Dalori Camp. He writes,

“The women stretch their legs as their malnourished infants suck disease-infected breasts….”

“The women wake up every day to see rooms filled with new refugees, trucks filled with few relief materials for the displaced.

The women watch their children lie on the mats, as another night begins with people searching for the meaning of home in the sadness of a woman washing the blood-soaked dress of her daughter,…”

Sudanese poet, Bigoa Chuol in her poem, Birthwater, says, “When war breaks, we run,” Also, Wardan Shire writes, in Home, “No one leaves home unless home is the mouth of a shark.” Bigoa’s and Warsan’s lines fit perfectly into the war subject Rasaq keeps exploring throughout his chapbook. He writes in Leaving Home, “On the train, we say goodbye to our moribund homeland, to friends who don’t know how to end grief, to friends who search for what remains of everything that is no longer home.”

To lay emphasis and a solid connection to Warsan and Bigoa’s, at the end of we do not know where we belong, Rasaq writes,

This is a clear testimony that war presents the same results from Sudan to Somalia, to Nigeria, and everywhere in the world. War brings displacement and forces its survivors to look for a haven, a home. Rasaq writes, “Grateful for life after the bombings, for the love that cradles us in spite of the war that wrecks our land, for joy in the cries of infants in their mother’s arms.”

It’s not sheer gainsaying that the poet Rasaq Malik brilliantly explores what war carries in its pocket with careful and rich but bereave-infested diction. He has taken us through different phases of war, using his country, Nigeria, as a case study. There have been many kinds of writings addressing the nature of war in Nigeria—the Civil War between the Nigerian government and the Biafra Republic is one of the many wars that have been fought over the years in Nigeria— Even though the reason for this war and the insurgents’ war are far apart, they have absolutely the same thing in common, which is the fact that war remains war, no matter the triggers, causes or the perpetrators involved. War leaves ruins wherever it happens. Such a place and its inhabitants never stay the same. It’s not out of place to say Rasaq must have had JP Clark’s famous Biafran war poem, Casualties, in mind whilst writing No Home In This Land.