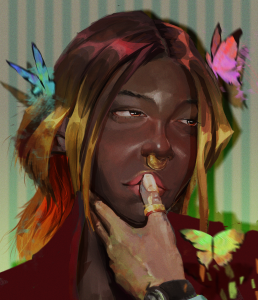 Sheed Sorple Cecil is one of the creative duo behind the now-dissolved Blake Arts brand. He has worked and done designs with brands and institutions like Lead City University, Babcock University, Filmhouse Cinema, CBC Building in Lagos, Absolut Vodka, Chivas Regal, and a lot more. I had a chat with him about his experience as a digital artist, especially how he started, and his motivation for his work as a community builder.

Tell us about your journey in digital illustration? How did it start?

I began my career as a digital artist in 2012. I was still primarily a traditional artist studying at the University of Ibadan until sometime in 2015 when Joe Abdallah (a former Big Brother Nigeria housemate) and I received a contract from someone who wanted to launch a media venture in Ibadan. We were students at the time. I was appointed as the team’s digital illustrator. Because there was so much to do, and we had so little experience, the job was at first intimidating, but within a few months, we acclimatised and were doing very well.

A while after, I quit my job at the venture due to troubles dealing with the owner and the associated pressure. The pay was ridiculous. It was literally peanuts, and then the management started being unreasonable with the quantity of work they made us complete. The company became a dumping ground for ridiculous expectations, and you must actively fight for your right to survive. I had to say no, and it forced me to take a temporary break from the realm of digital art.

I remained that way until 2017 when I received a call after someone had recommended me to a new company. They wanted me to create the concept art for their animated kids’ show. I returned to the digital world in this manner. Two to three years had passed since then. From there, it has been a steady climb. I improved as a digital artist with every encounter. I have grown so much today, and I understand how crucial growth is to a creative person’s career. I’ve reached a point where I wouldn’t swap my ability to develop as a creator, digital illustrator, and concept artist for anything.

How do you get your inspiration?

I have a continuous process of taking in information, and I just try to be in the moment in every environment I find myself in. As I sit down here, I try to listen more to the sounds outside and notice the colours. My brain is always in a constant state of combining past information with present data. So all I need to do is just keep paying attention.

And when I am less occupied, my mind wanders through mental images and finds out things that could be good enough. And When I have my head on something, something always comes out, it might be a good idea or a bad idea but I always try everything possible to bring out something. And Sometimes, anything interesting can come up in my head from some of the mental information I’ve taken in the past, and I just try it out. If it turns out to be something good, I invest more time into it. As that’s how the inspiration part works,

Do you think digital art is different from traditional art?

I can’t really compare. I don’t think any of the modes of art is difficult or easy. They have their own technicalities. But I don’t think digital art is easier than traditional art because if you pick a medium for your art, the deeper you go into it, the more you’ll learn new things. But art is infinite, so whichever medium you want to work with is totally fine. An amateur will still do an amateur kind of art, and a professional will do something that looks professional. So eventually it’s the results that matter. And there is no particular medium where you get more things done, they’re equally technical, some of my experiences in digital art helped me with traditional, and some of my experiences in traditional art helped me with digital, so eventually, they complement each other more than they compete. If you know what I mean.

What do you think about the NFT? are you in that space?

I think the NFT space is very interesting. I do not have so much information about it right now and I don’t think anybody does because people just came up with the whole idea, and everybody’s trying to figure it out. They’re trying to see how far they can go with activities in the NFT space before the trend starts fading. But I know it is a space that is vibrant because life has been changed by it.

Generally, I think people have different predictions about NFT, but whatever will happen will happen regardless. So, I think it’s not something to predict.

How do you explain your art to someone that has no idea of what it means?

My art is about putting emotions into paintings in a digital form. I like when someone looks at something I created and sees it from a place of humanity. I like to say my art characters have emotions. It’s like they have the core decision-making skills that humans have.

To make it less robotic, I’ll say I focus on more intuitive art characters. This is where life is. It’s the foundation of my art. It’s like putting life in art characters and making them express things like dynamic poses and gestures which are supposed to represent the emotional nature of humans. The ability to slip into crevices and make decisions that are not black and white that humans possess is exactly how my art characters are supposed to be, and also they don’t have specific stories that belong to them, they represent humanity.

So if someone sees my paintings, I expect them to pick up emotions from the characters, even the elements, the shapes, the values, and everything that makes up the painting. The canvas is only there to help direct your thoughts to the right emotion because eventually, it’s not the detail of what I did that matters but the detail of what I did to push you towards the emotion. So you can tap into yourself and whatever emotion you feel as an audience. It’s basically whatever memories they bring for you and how you relate to the painting. It’s more like telling you a person’s story and how the person feels on my canvas, and then you look at the canvas, and you are like, oh my god, I felt this way before, but it was distorted.

What do you think about the future of concept art and illustration in Africa?

I can’t say for sure about the future of concept art and illustration in Africa. Unfortunately, I’m not one of the stakeholders in the industry. I’m just an artist. I will be a concept artist with ten more years of experience in the next ten years. So I’m not on a political journey with the art industry. I only know what I’m going to do, and even if it threatens the industry I’m working with, I’ll find a way to ensure I keep doing my life’s work. And I don’t think my life’s work is to lead the industry. I’m sure there are people with proper skills who will generally make good decisions to ensure the industry thrives. I only focus on my growth.

What is your idea of an amazing day?

My idea of an amazing day is that I wake up early before dawn. It’s a plus for me when it rains. I go to the kitchen and make some coffee. And then I check my phone to see if I had any messages that came in during the night, I also check my emails. I like to do breathing exercises once in a while. So I do that and sit in front of my computer and do a few warm-up sketches. And sometimes I do them on paper before I go digital. I do these warm-up sketches to get my brain and hand coordination back in the right order. Then, once everything is working right, I just continue with the flexibility for the day. That’s as much as I can say.