I am an Educated Fulani, Why Do People Think I am a Terrorist? 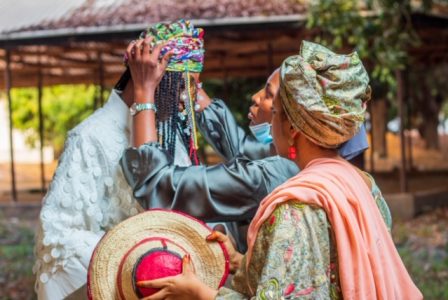 The Fulani tribe (Fulbe) is one of the largest ethnic groups widely spread across the West and Central African regions.The Fulbe people can be identified with the marks on their faces, light skin tone, curly hair, and pointed noses. Their men often carry a stick resting on their shoulders. The women braid their hair with beads to look more attractive and use lalle (henna) to decorate their hands and feet. Arguably, in almost every Fulani community, people marry within their local community, as it’s difficult for one to marry outside their clan.

In every part of the world, the Fulbe were known chiefly for cattle breeding and pastoral farming. Some are known for moving from one destination to another with their herd of cattle. Through the cows, they get fresh milk (Kossaam) which, when fermented, turns into yoghurt (Pendidan). During festive seasons, marriage or naming ceremonies, and other special occasions, they slaughter cows for food and celebration.

The Sharo festival is quite possibly the most celebrated in the Fulbe community. This festival is done twice a year—during the dry season when crops are harvested and also during the festive Muslim season of Eid-el-Kabir. It is a gathering of young boys lining up in an open space and getting flogged. The person who endures the pain and shows the most bravery is regarded as a strong man and is allowed to marry any girl of his choice within the community.

Art and creativity play a significant role in the lives of every ethnic group. The Fulbe people aren’t any different. They are good at making beautiful calabashes, often coloured in deep red and orange, which serve as milk bowls. Mastering verbal art gives some of them a way to express themselves through song and poetry. Some are also good at drumming. They are also known for designing recognisable, beautiful Fulbe fabrics.

As an educated Fulani now living far away from my local community, I always try to recollect the memories of where I came from and who I was. I was a nomad, just like the other Fulbes. I lived in the village for many years as a child before relocating to the city to learn how to read the Qur’an and gather knowledge on Hadith and Fiqh. Unlike the Fulbe in the village, I had the opportunity to go to school, where I learned how to read and write.

In the village, the only thing we held on to was watching after the cows, getting milk from them in the morning, and then taking them to a nearby bush to eat some grass. It was a wonderful yet sad experience.

I try to think of what my life would be like if I were still living the nomadic lifestyle. Would these urban dwellers laugh at me and mock me as they always do to the non-educated nomads who are not as lucky as I am and have never tasted either Islamic or western education?

But then, even as a city dweller, I still experience so many nightmares and discrimination for just being Pullo. It’s saddening to write that Nigerian society sees every Pullo as a bad crop. They are all being tagged as terrorists, kidnappers, and bandits. But the truth we all know but refuse to admit is that in every tribe, we can find the good ones and still watch the bad ones. But nowadays, the scenario with Fulbe is a different one. The world sees them all as bad crops. I have been stopped several times on the highways at checkpoints, where I have been humiliated.

I could remember when a governor from one of the northern states and some stakeholders from different parts of the country asked the president to declare all Fulbe herdsmen terrorists, which I felt was not right.

Even with all the issues surrounding our homes, we need to know that, as much as it might be shocking to people, the Fulbe people are doing well being represented in important civilised industries. Representatives like me are doing well in the arts. Some are positively impacting and changing people’s lives through social work. Still, some are coming up with innovations and curating ideas that can spark development in their various communities.

It’s high time the world awakes to reality with an open mind and accepts the Fulbe people as part of it. Yes, we have the terrible Fulanis who go about terrorising the world, but they are not exclusive representatives of the entire Fulani population.

When we begin to give room to the fact that bad people from an ethnic group are outliers and should not determine our stereotypes towards the ethnic group, we can begin to experience peaceful coexistence among ourselves and help build a better world.