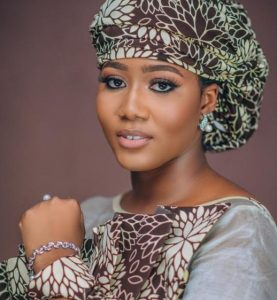 Hassana Maina is a lawyer, poet, and advocate against sexual violence. As a poet, she has been invited as a guest and panelist to many literary events including the Yasmin El Rufai Foundation, Purplesilver Community, the Women for Women Event, and Open Arts. Hassana is prominent, especially for her involvement in the NorthNormal campaign for ArewaMeToo in northern Nigeria, which started in response to nationwide hesitation by lawmakers to domesticate important legislations about SGBV.

Hassana wants to see that the world is a better place and everyone is treated rightly. She speaks with The Moveee about her creative life as a Black person who now has experiences of being Black in both a predominantly Black society like Nigeria as well as a society like the UK where Blacks are part of the minority groups.

HANEEFAH ABDULRAHMAN: As a human, how would you define the Black person, the Black community, and the Black existence outside of racism?

HASSANA MAINA: Thank you so much for your question, Haneefah, but unfortunately, I cannot define a Black race without recourse to racism. Because whether or not we like it, our existence has been shaped so much by our skin. And we do not have the luxury of forgetting. Other people can like to forget, but our experiences would not let us. There is a difference between how we experience the world and how we’re allowed to experience the world. So you end up realising that we cannot define our existence without making recourse to such social ills that have marred us to such a great, great extent. But having said that, I feel that the Black existence is that of resilience. It is that of existing in a world that would rather have you not exist. It’s just like a tree sprouting from the rocks. But despite all of the obvious hindrances to that tree’s growth, you just see it sprout. Maya Angelou captures it perfectly in “Still I Rise”, where she says, “You can bury me in the very dirt, But still I rise.”  And I think that line is very powerful.

Oh, I agree with you when you say you cannot define the Black race without making recourse to racism. So tell me, as an activist, a lawyer and a poet, how does the Black community inspire your work?

Oh, this is very interesting. Because I think it was Chimamanda that said she had never thought of herself as Black until she moved to America. And for me, I think I have never thought of myself as Black until I moved to London. London is a very cosmopolitan place, but that is where you realise that you’re not the same as people. Yeah, and also, at the heart of it, when I was in Nigeria, it was a predominantly Black community. And so it was just me advocating for things that I cared about, one that affected every other person that I know in my community. So being Black or the other, the issue of my skin colour or racial identity has never been anything that I had to think of.

What is more relatable for me is sexism because I could see how that played in my society. But also because I love to read, I empathise with the experiences of Black people, especially in the Global North, like in America, or let’s say, in the UK. But up until when I moved to the UK, it’s not central to my existence or my theme as a writer or an advocate.

Okay, how does it feel to think of yourself as a Black person in London?

As I said, London is a very cosmopolitan place, but regarding racism, I think we live through other people’s experiences. Last December, I remember that staff members in my school went on strike because Black lecturers were not receiving as much money as their white counterparts, and women were receiving significantly less than men. So these are the kind of experiences that you get to hear about, and then it affects you deeply because it is close. So at the end of the day, I feel my experience as a Black person is that of one who has seen and read other people’s experiences and empathising with them, knowing that it could be me.

It is so heartbreaking thinking about how some humans treat other humans. This issue of discrimination could be part of human nature. You see issues like tribal discrimination and gender inequality when you come to Nigeria. So what can you say about this? We complain about racism, yet, in our own country, we have issues about tribalism, inequality, etc.

I feel discrimination is as old as time. And that is why we must fight this. We must find a way to stop it. People should not be judged based on their sex, gender identity, or skin colour. Unfortunately, that is happening. But everywhere you go, there is a varying level of discrimination. But this is where accountability comes in. Companies must enforce policies to ensure no discrimination, and governments must ensure that. And if we’re able to hold each other accountable, then maybe we would eradicate this.

Fortunately, few people are still fighting to keep the world sane, safe, and pure. You have achieved several notable feats. What has the journey been like?

I am not trying to sound modest, But I do not think I have many achievements to my name. I think I’m just starting in life. But essentially, with the help of God, as you said, we have been able to do little stuff, like the Arewa movements, trying to get the act domesticated in states, which some states were able to domesticate, with our efforts combined with that of other stakeholders. I think it has a lot to do with the community, with the kind of people I have in my life that push me to be the best version of myself. It also has to do with knowing that I owe it to myself just to work hard and be there and stand up for what I believe is true. But I do not necessarily think that I have achieved a lot.

So what are the major pain points you are working towards achieving with your works?

One thing I am very passionate about is ending sexual violence. I like to live in a world where young people are not victims of sexual violence, where the statistics are drastically reduced.

As a Black creative, you have written a couple of poems and performed some. How do you get your inspiration?

I always say that poetry comes easy to me. When I feel I have to force myself to write a poem, I simply shouldn’t be writing it. Poetry always comes to me, just like the urge to urinate. There’s a persistent urge to want to let it out. Poetry is a way to explain my experiences or other people’s experiences. Poetry is just like a flowing river. Sometimes I feel like my experience as a human being is like a sponge dunked in the water of experience. When it’s soaked in so much water, you’ll eventually have to squeeze out all of the water. And then the sponge comes back to its form. Poetry is me squeezing out the water I absorb from experience.

I love the way you explained poetry. It holds so much power. Do you remember your first poem?

I’m not sure I can remember the very first one. My earliest recollection of writing was when I was about eight years old, and I wrote a poem. I had written something so important I couldn’t wait for my dad to return. And the moment he got back, I ran outside, and I just couldn’t wait for him to park his car. And I was like daddy, I wrote a poem, and I read out the poem to my dad. And then it had been a ritual that whenever I wrote something, I would read it out to my father. But I can’t remember what the poem was about. I can’t remember the process. But this is what I can remember: at the age of 8, I wrote a poem, and I wanted to read it to my father.

What do you have to say to every Black creative?

Ciku Kimani Mwaniki on the Unconventional Path of Self-Publishing

Onyeka Nwelue Believes Africa is a Graveyard of Wasted Dreams

This is How Samuel A. Adeyemi Uses Poetry to Reimagine Nihilism