Oladeji Onwugbufor – The Essence of Self-Representation in Art 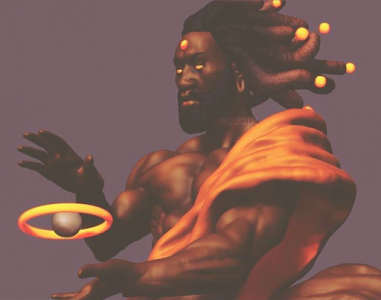 Oladeji Onwugbufor is a UK-born Nigerian-based digital artist who has had a knack for art since childhood. He specializes in CGI, also called 3D art. This cuts across 3D characters and 3D environments used in architecture, engineering and film production.

In ten years of professionalism, he has morphed from using his art to present the African culture to the rest of the world into using it as a medium for self-representation. In this feature, he speaks about his creative journey and shares a personal perspective on the role of the creative in society.

How did your creative journey start?

Some of my earliest childhood memories involve drawing, which I kept doing until my late teens and early 20s. But around the time I got into university, I discovered that pursuing a career in animation was possible. I grew up knowing that people worked on movies and video games as a profession, creating incredible works like Jurassic Park, Star Wars, and the Lord of the Rings, and I thought that one day I would be able to do something like that. All the amazing movies I grew up watching inspired me to continue making art as I grew older. When I decided that I wanted to get a degree in 3D animation, my parents were dismayed.

Ah, interesting. How would you describe your growth process since then?

I would say my growth process has been quite tumultuous. It is difficult to describe this without getting into detail about the process of 3D itself. But the main thing I learned is that to be successful as an artist, you must find a way to teach yourself.

My parents, God bless them, spent so much money for me to get this degree in animation, but it ended up being quite unnecessary because that four-year degree didn’t teach me one-tenth of what I managed to learn within a year and a half by myself on YouTube. So, I felt I wasted so much time.

In school, they only teach you according to a curriculum, and I always felt held back. Some of the things I was taught in school were outdated compared to what I saw from artists in the same field. It always frustrates me when I come to school and see them teaching us using outdated software and techniques. It’s a tech-based industry, and tech-based industries are constantly under so much development that you have to keep up with the technology. The lecturers didn’t seem to understand this, and I wouldn’t necessarily blame them because you know what they say about “those who can’t do, teach.”

There’s no growth process without its challenges. Can you share some of yours?

Aside from the obvious ones I mentioned and convincing friends and family that this wasn’t the worst decision of my life, things like electricity can hinder your ability to learn animation in a country like Nigeria. Anyone who does anything tech-related can relate to this because you need electricity to not only do the work but to access the internet to access the tutorials to learn the work in the first place.

Another challenge is the culture around what I do. People don’t consider art a legitimate career path as they would Medicine, Law or Engineering. But I understand Nigeria is still a developing country. So, this view towards what I do is not something I’m entirely frustrated by, but I hope it would get better soon.

Last is that people working within the industry don’t respect their fellow artists. Oddly enough, some of the worst people I’ve had to work with since I came to Nigeria are also in the entertainment industry. They always want to get you to do things for free or at low prices. They don’t understand that doing certain things at a certain quality takes time. Thus, it costs more money.

We hope things get better in the days to come. So is the realistic 3D art market in Nigeria densely or sparsely populated?

I’d say it’s sparsely populated. But as time passes by, things are changing.

Most of what we see when it comes to 3D arts in Nigeria is very stylized and cartoony, usually geared towards children. I often joke that most 3D artworks put out on social media by Nigerian artists are basically the Black version of Pixar or Disney. As I said, it’s a joke, and I have nothing against them, but it’s always a pleasure to see a break from that.

The beautiful thing is more people realize the value of realistic renditions of characters. This seems to be the staple of the big guys, even Bollywood, not to talk of Hollywood. To recreate the magic we see in movies like The Avengers, DC, Justice League and all of that stuff, we would have to create more realistic renditions, not just the traditional stylized cartoonish renders of 3D characters.

Seeing more people willing to dive in and put in the effort gladdens my heart. It’s a win for all of us. Anytime I hear that a 3D artist out there feeds his family and pays his bills in a country like Nigeria, it makes everything better.

That’s a relief. Indeed there is light at the end of the tunnel. What drives you?

At first, the drive towards what I do was to send a message with my art. Growing up, I was frustrated not to see any representation in the media for people who looked like me. All the good guys and superheroes were always white. The flip side of this was that the bad guys were always people who looked like me in terms of skin tone, hair texture, and eye colour. That sharp contrast was difficult to handle, and it bothered me.

So, I eventually concluded that I should probably do something about it since I had an issue with it. That was the beginning, but now, I would say that things are slightly different. I do it now because I like it. I know that might sound very anticlimactic, but that’s the truth.

Now, I’ve let go of that political baggage with my artwork. Yes, I still represent my heritage and root, but I’m not all driven by just representing it out there. What I think is essential is self-representation. It’s far more important for Black artists, creators, painters, sculptors, animators, writers, composers, etc., to be behind the final product because a lot of Black artists have gone ahead to put their necks in projects that did not recognize them or pay them in the name of representing the African culture. So, I don’t care if I see a Black version of spider man or a Black version of Iron Man. What I care about is “who profits from these projects?”

I’m happier seeing the Black artists and creatives who worked on the projects getting credited and paid enough to pay rent and feed their families. That’s far more important to me.

My current focus is not on sending any message for representation or whatnot. It’s about doing the best that I can do with what I love to do. And it just so happens that Africa is the aesthetic and the medium I use.

What do you have to say to newbies trying to venture into realistic 3D art?

I would say more power to you. And I wish you all the best because the more we are out there, the more viable and valid our career choice becomes. It’s beneficial to us all at the end of the day.

But in terms of more practical advice, I’d love to say “good luck” because it’s a very long, long road. A lot needs to be learnt at a high level to achieve the desired results. It doesn’t come easy.

But if you can get to the other side of learning, the investments you inevitably have to make, financially, emotionally, and technically, will all be worth it. I guarantee you like a trillion percent.