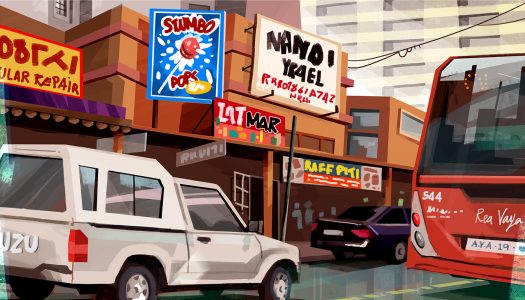 South African artist, illustrator and animator Mogau Kekana wields his experiences into compelling stories. For Mogau, careful observation precedes creativity, a philosophy evident in his works. He strives to change the African storytelling scene through animation. He began his creative journey as a primary school student, and he went ahead to major in video and animation at the university.

Mogau is one of the animators making a significant impact in the South African creative industry. His project Red Ants, a heart-wrenching story about Khaya, a young South African eviction enforcer — called a Red Ant — who becomes both perpetrator and victim,  premiered at the Annecy Festival in 2021. Inspired by personal experiences, Mogau’s Red Ants investigates how regular people in South Africa are affected by the growth and improvement of cities. The short film, which is only one minute long, recounts a story of change and displacement.

Here’s a dialogue with Mogau about the role and growth of animation in the African society and creative community.

Why is art important to society, and how does animation contribute to that importance?

Art is an observation of society. It’s one of the ways we can see what influences people’s lives, decisions, status and aspirations.  So in many ways, art can make us understand society better.

Animation is the simplification of pieces of our existence. It can simplify complex visuals and concepts into bite-sized mental pieces. Maybe that’s why kids’ cartoons are so impactful. We can communicate almost anything in this format in the gentlest of ways. And we can do the exact opposite if we decide. All in all, animation is the most versatile form of communication.

Animation is beginning to rise in Africa. Why should we pay attention?

You made a short animation on gentrification in South Africa. Why was that an important story to tell or portray?

I grew up with gentrification around me, and I thought it would be cool to portray that in animation. What I found interesting was the fact that the people who were involved in this process were also the same people who would one day suffer the consequences. I wanted to explore the irony of this idea. Also, I think South Africa is full of irony. That was just one of them.

Are there specific people or things that inspire you?

As much as I love animation, my inspiration comes from photography and live-action films. I look up to two directors now: Quentin Tarantino and Wes Anderson. Wes Anderson’s comedy, symmetrical shot composition, and Quentin Tarantino’s suspense and passion-filled emotional scenes have impacted how I would like to tell stories.

Also, I’m fascinated by photographers who capture the nuances of African aesthetics.

Most of my works are primarily Afrocentric because I like to portray the beauty I witnessed in the places I grew up. The people, environments and cultures I was exposed to while growing up all have rich and profound stories.

Hopefully, all these influences from film and photography give life to something beautiful in the long run.

What advice would you give to other young artists looking to make impactful and insightful work?

Impact and insight come from observation. Communicating what you see and hear as honestly as possible allows your work to feel authentic. So,  I would advise observing and being truthful in your career.