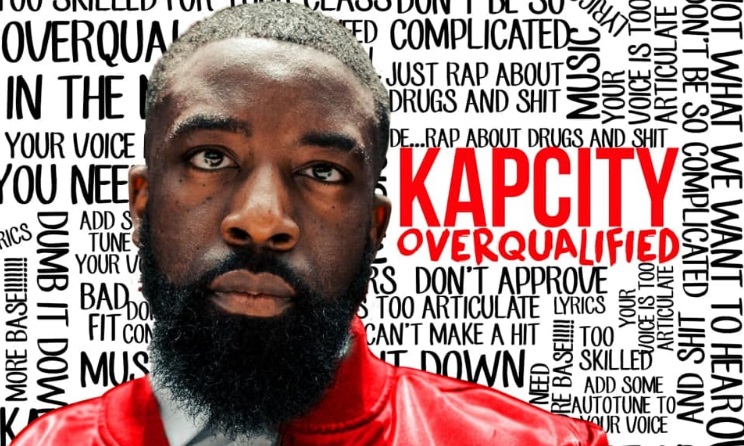 Hip-hop diehards and KapCity fans no longer have to wait. The Miami-based Zimbabwean rapper KapCity has finally released some newly recorded music in the form of an EP, a surprise release titled Overqualified, after a long period of being blessed with dope freestyles and some awesome visuals on Instagram (a tape of those wouldn’t be a bad idea, by the way, because they slap!). The artist has done covers for tracks like “SICKO MODE” and the like and has also dropped “Talking About Us” with some cool visuals along.

It Feels Good To Be Home, Kapcity’s most recent album, was released in 2017 but was not received particularly well domestically. Even though it was regarded as a “good” project, no music from his native country was included. It was followed by a few singles, including the nice one “Talking About Us,” but thanks to Overqualified, we can all keep an eye out for some local talent.

The EP artwork is pretty slick, and the red, black, and white colour scheme that defines KapCity effectively announces his return before we get to the music.

Overqualified is a seven-track package for everyone with local features from Cal_Vin to H3nry and some killer bars, especially on “Chando” and “Facts” as Kap, H3nry, and Cal_Vin square off and fire up dope hip-hop joint with vernacular lyrics. This is especially awesome since KapCity has long received flak for its refusal to support regional songwriting traditions.

Additionally, keep an eye out for the song “God (Good Old Days),” in which Kap gives us a taste of some of his earlier work (such as the album Success), while the hit song “All For Me” has a strong pop influence.

KapCity, as usual, strongly represents H-Town on Overqualified, but the question still stands. Does the hype imply by the EP’s title match up with his performance?

Please look at the miniature masterpiece and let us know what you think.