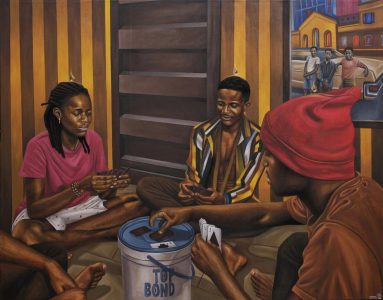 Ikeorah Chisom Chi-Fada sets his characters in “an atmosphere that respects them” and “a space that reveres them in and through culture and time” in paintings bathed in warm, diffused light and painted with such care and devotion. His art is a strong means of rejecting and confronting preconceptions unjustly placed on him and his fellow Nigerian citizens, as he tells us that he loves to write stories that “represent the passion and eternal resilience of Nigerians to defy the odds and dream.”

Despite the fact that his artistic journey has been fraught with challenges, Ikeorah has defied all difficulties to pursue his passion. Ikeorah was born in Ajegunle, Lagos, in the year 2000, to a group of “very creative friends.” They would draw and sell superhero comics to raise money for art supplies, working with a “group of young street lads” and his primary school closest buddy. Teachers sought their assistance in drawing intricate diagrams and on the chalkboard, and they would often take on drawing tasks for younger students for a change of pace, or occasionally nothing at all. Despite the fact that the latter frequently got them into problems, they never stopped because they were too engrossed in the “pleasure” of creation.

Despite the fact that art gave Ikeorah “a lot of meaning and satisfaction,” his mother thought he was too smart to pursue a creative career and instead wanted him to “learn a genuine trade that pays.” Ikeroah lamented the loss of his artistic outlet after he stopped drawing owing to “pressures at home.” It wasn’t until after a horrific occurrence in which Ikeorah came close to losing his sister in a fire that he began covertly drawing again “as a means of expressing my trauma and seeking relief.” Following that, he would draw his sister as a “superhero figure with flames as a superpower,” and the incident has remained a significant reference point in his work to this day: “you will notice shining flames in my paintings that suggest a deification of the figures.”

Ikeorah eventually relocated to Owerri to study Urban and Regional Planning in order to please his family, but the move also gave him greater freedom. Ikeroah began painting alongside his studies after quickly realizing that the degree was “nothing close” to what he wanted, frequently arriving late to lectures in his studio clothes, smeared in paint. In 2018, Ikeorah began his career as a professional artist, honing his abilities and accepting assignments. Now, reflecting on his path and thinking about how far he has come gives him “goosebumps.”

Ikeorah continues to be affected by “his personal experiences and association with [his] social milieu,” as he describes his artistic approach as “an unfolding story.” Ikeorah tells us that “there is a popular stereotype about Nigerians being fraudsters,” and that in order to dispel such derogatory and unfounded stereotypes, he instead tells stories “of the hopes and dreams of Nigerians and in extension, black people […] I get a lot of motivation from seeing how hard Nigerians work despite being in a very non-functional system.” His series on a tailor, for example, exemplifies this striking method. The tailor is bathed in bright sunlight in the series’ best work, his face poised in quiet concentration, and Ikeorah’s rich color palette powerfully brings the whole painting to life. One of the most relevant anecdotes Ikeorah has heard is about meeting the tailor at university. The tailor not only supports himself through university by making all of his own garments and selling the remainder, but he also supports his mother, who sold all she has to give him an education. The paintings “convey a story of a mother’s love and sacrifice, as well as a young Nigerian boy’s hopes, aspirations, and tenacity,” according to the artist. Ikeorah hopes to motivate his subject through the series – “I believe my paintings can assist feed his motivation and trigger some sense of self-discovery or value,” he says.

It’s easy to see why Ikeorah needs such a strong connection with his subjects for his art to be successful, given how much of himself he pours into it. The majority of the characters in Ikeorah’s paintings are people he knows or who have compelling backstories. The few times he’s chosen models at random – once when everyone had left town for the holidays, and the other when people were contacted via social media during the epidemic – they’ve never worked out, and he’s scrapped the project. Ikeorah, on the other hand, has stated that he draws inspiration from his dreams and memories in some of his pieces, such as Redemption. “In a dream, I saw a stately lady riding a horse, and that gave me the idea.” That was all I recalled, so I had to piece together the composition from memory and some found photos.” With its ethereal aspect, it’s easy to understand how the piece is based on a dream, but we can’t help but be astonished that it was created with little to no composed visual aid.