From Afrobeat to Afro-x: A Brief Account of the Evolution of the Genre 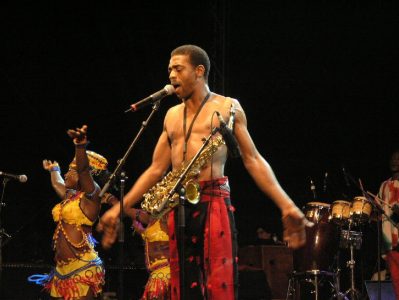 Since the death of Nigerian instrumentalist and bandleader Fela Anikulapo Kuti, Afrobeat music has taken on a whole new dimension. While his descendants and a few other artists of African descent are still in the practice of this genre, others have redefined what the genre truly entails.

In the 60s, Fela coined the term “Afrobeat” and its underlying music genre due to his distaste for western styles of music. The roots of Afrobeat are traced to Ghana, where sometime around the 1920s, the sound developed with the influence of highlife and combined the West African sound style with jazz influences.

Fela, who created this genre, brought it to Nigeria with the hope of introducing the sound beyond the shores of Africa and popularising it, with the likes of Tony Allen, his former drummer, spreading the gospel. You may not be wrong to think of Fela as a huge Afrobeat contributor, but you are mistaken to think of him as the originator. See it as he is the developer of Afrobeat and Ghana Nation, the origin.

The Development of Afrobeats

Fast forward to contemporary culture, and the baton of greatness has forcefully been taken from Afrobeat by Afrobeats—the imposers of the actual genre and culture. Afrobeats might have borrowed a stem or two from its predecessor, but it doesn’t mean it is the same as its roots.

It is worth noting that Afrobeats might be a poser for the Afrobeat genre, but the former still share the same vision as the latter. They might share a trajectory but are different in their ways, and this difference goes beyond the inclusion or exclusion of the letter ‘s’.

The term Afrobeats was coined by a British-based Ghanaian, DJ Abrantee. Unlike Afrobeat, it is a conglomerate of genres born out of exploration and creativity; it’s party music, a combination of hip-hop and Jamaican dancehall, most often taking a contemporary approach. It is a poser for the classic genre and is nothing more than the sound of the moment.

In 2005, MTV Base Africa came to West Africa, Nigeria. It became the game-changing platform for rising pop artists like Naeto C, Sarkodie, and MI Abaga. The birth of Afrobeats began around this period. These artists, now kings in their kingdoms, did beautiful things in their time.

Scaling Afrobeats: Beyond the African Shores with International Collaborations

The growth of Afrobeats beyond Africa happened much later. That is after the Afrobeats, as an offspring of the Afrobeat sound, has undergone considerable restructuring. The most significant accomplishment following this restructuring is the increasing collaboration with international artists, leading to Afrobeats artists incorporating western voices into the sound. This development is ironic, considering the purpose behind the creation of Afrobeat in the first place. It’s like a complete cycle back to base.

Evidently, we are in the era of international collaborations, but we must mention how we got here. In 2010, just at the start of the new decade, D’Banj kicked off the rave of partnerships with international artists, beginning with the feature of Snoop Dogg in Mr Endowed. Then in 2011, the artist duo Psquare featured Akon and Rick Ross on two of their songs: Chop My Money Remix and Beautiful Onyinye. Featuring Akon at a point in the African music scene became a “see-finish” kind of collaboration. The Senegalese American foreign artist felt too accessible, and we yearned for more. Then came Dbanj, again, with the blasting appearance of Kanye West in his Oliver Twist music video. These collaborations should have hinted that the future of Afrobeats is outside of African shores.

Today, top artists like Nicki Minaj, Drake, Beyonce, Justin Bieber, and Ed Sheeran are embracing Afrobeats and scurrying to hop on the train.

Afrobeat is lost but not dead. It lingers in today’s Afrobeats, with Fela’s influence evident all over it. Afrobeats acts keep ensuring that this influence remains obvious. Burna Boy, for example, is an ardent sampler of classic Fela tracks, imitating the legend’s way of addressing societal ills with music and giving the audience a good time with his live performances. There’s also Wizkid’s perfect imitation of Fela in his song, Jaiye Jaiye, featuring the legend’s grandson, Femi Kuti, both in the song and music video.

International record label signings are the icing on the cake in Afrobeats. The likes of Naeto C might have been entirely unlucky in this part. Also, the likes of Davido might have struggled for a few years before bagging these deals, but it appears that the new crop of artists have it a little easier. These artists are milking the opportunities to bag international signings as easily as they would purchase clothes in a store. It’s a big win and a beautiful thing to see.

Ultimately, the current stage of Afrobeat evolution has ushered in a new wave of vocabulary and culture. Just as Afrobeats stemmed from the Fela-era Afrobeat, they are now evolving beyond that, possibly out of the cultural rebellion of new school artists. While they have an afro-sound infused into their music, they like to believe that it has a unique feature that highlights their brand as an artist. Ckay, for instance, thinks of his music as Emo-Afrobeats.

Regardless of the conflations, Afrobeat and its catalogue of offshoots have stood the test of time and are increasingly being embraced at home and abroad. The transitions with the sound are fantastic, and while we’ve seen its success over the past few decades, we wonder what more the sound will produce for our artist.

We are putting Nigeria and, consequently, Africa on the map with our music, with Afrobeat(s); Fela must be proud.