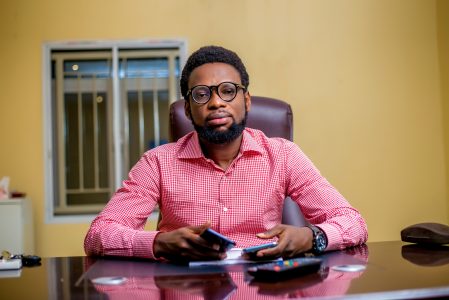 In April 2022, Foundation for Investigative Journalism (FIJ) reported that Fisayo Soyombo emerged as one of the 13 selected fellows of the Reuters Institute for the Study of Journalism at the University of Oxford, United Kingdom.

As part of the 2022 fellows, Soyombo is to research “the rise of a willing army against the truth — the practice of drowning out a genuine work of journalism with coordinated media campaigns that confuse unsuspecting public members, consequently leaving the authenticity of the story in tatters”.

It is another well-deserved achievement in the life of a man who has sacrificed so much to unravel the truth.

In retrospect, it is typical of Fisayo to go into the jungle knowing very well that the beast of the nation could eat him with no second thought. To put that into a broader context, take the following exceptional story in his career as a cue.

In 2019, Fisayo was detained for five days in a police cell and eight days as an inmate in Ikoyi Prison. The imprisonment was deliberately planned by himself, and it attempted to expose the corruption in Nigeria’s justice system. He went undercover as Ojo Olajumoke, feigning to be a felon. In an interview, he was asked what was running in his mind when he was being tortured by a prison officer who discovered that he came into the prison with a recording device. He had said, “I felt my loyalty to my calling was being tested. I saw it as a test of my conviction that this society can work and the role of investigative journalism in making that happen.”

He added, “In any case, I took the final decision to do this story back in 2017. So, during the beating, I kept reminding myself that I’d psyched myself up for the assignment for two years, so this was just a test of how well I fared.”

No matter how bold a human is, there are times that he would have glitches of doubt and fear. Fisayo Soyombo isn’t an exception. He had only spent about an hour in prison when it dawned on him that all the stories about cell congestion in the Nigerian prison system that he’d heard were true and not some imaginative tales.

On the day he got to the prison, the officials crammed sixteen of them into a tiny cell room. He thought it was hell until they brought extra inmates into an already cramped cell. He immediately began to have second thoughts about the mission, but he knew he wouldn’t still call it off despite the pain. As a hard-core investigator, he is mentally well built for these herculean tasks.

In a diary report, he wrote about how five of them who were suspects were bundled together. They all struggled to fit in the small mat provided in the stinky taper cell. While the other four suspects were in a deep sleep, Fisayo was wide awake. Even if he wanted to sleep, the noise from snoring and coughing inmates kept invading his hearing. The air fumed with alcohol.

Fisayo’s release from the prison was a tug of war. The prison officials at Ikoyi were desperate for his release. At the same time, those at the court preferred he forever stay in jail, especially the corrupt ones he succeeded in filming during his stay at the facility. They plotted closely with the officials at the Magistrate, Yaba, in the quest to keep him in jail. Something as simple as granting bail became an infuriating battle until the intervention of senior judicial officers, who demanded that he be granted bail on Friday, July 19.

Court officials collaborated with prison warders, and his release was fast-tracked. He had barely walked 50 metres from the prison facility before being kidnapped by crime officer Badmus and Inspector Obadiah from Pedro Police Station. He was eventually released before midnight of that day.

The following month, Fisayo went undercover again, spending ten days as a patient at the Neuropsychiatric Hospital, Yaba — also known as Yaba Left. He had narrated his experience of not being well fed alongside other patients. There was a shortage of staff and power supply, there were ghost workers, and so many things were not running as they should. Even though the rehabilitation centre is Nigeria’s most historical and despite the provision of facilities, he uncovered the corrupt system of people in charge of the hospital.

With all the daring tasks Fisayo Soyombo keeps taking on as an investigative journalist, one would wonder what he was like when he was younger.

During a 2-week solitary getaway he embarked on while a 100 level student at the University of Ibadan, he sat down to think about his direction in life. He had concluded that agriculture, which was the field of his study, was not his purpose. He had decided that journalism was his purpose. He took up roles in campus journalism and worked with Mellanby Hall Press Organization (MHPO) and the Union of Campus Journalists (UCJ). Fisayo gave so much energy to journalism like there is an earthquake, and journalism is the only way to survive it.

After winning five awards, the UCJ selected him to intern at The Guardian Newspaper. He was placed on the Sunday desk under the editorship of Jahman Anikulapo, who later became his mentor. Fisayo described Anikulapo as “probably the biggest influence on my journalism career.” He reluctantly left The Guardian in February 2011 at the end of the NYSC as there was no permanent employment at the Newspaper. He worked for a few magazines before joining The Cable in 2014 as a feature editor and was later promoted to editor. He left The Cable in 2017 and joined the International Centre for Investigative Reporting (ICIR) as the editor. He moved to Sahara Reporters in 2018, where he served as editor until 2019 when he decided to quit and pursue a freelance career.

When he decided to retire from full-time editorship, it was “with the recklessness and innocence of a child playing with sand,” as he described it. His friends thought he was mad and unstable. “If anyone leaves their job as an editor to become a freelance investigative journalist,” one of his colleagues had asserted, “they will die of hunger.”

“The step down in rank was never a problem,” Fisayo says. “Not even for a second! I’ve always thought your real career value is what is left after you’ve been stripped of official ranks. Official titles confer an imaginary sense of worth that sometimes disappears once the Journalist and the Newspaper go separate ways. You can be John Cena of the New York Times or Tupac Shakur of Reuters, but who are you when you are no longer with those colossal media platforms? For that reason, I have never had a problem with being ‘Fisayo Soyombo without TheCable or ICIR or Sahara Reporters.”

Why is Loveth Liberty making poetry that sounds “homemade”?