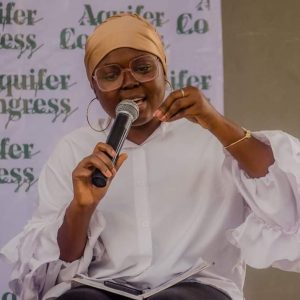 Kawthar Monisola Salahudeen is a writer, rights activist, policy enthusiast, and barrister-in-making. Kawthar was a fellow and now an alumnus of the Walter Carrington Youth Fellowship Initiative, an initiative under the United States of America where her zeal for civic engagement, social change, and civil liberties rightly placed her in a team of four other persons tagged Civil Liberty’s Team. She orchestrated alongside the team a project called Access to Service Delivery in Underserved Communities in partial fulfilment to reduce inequality.

During her final year at the University of Ibadan, Kawthar received the Purvez Bilimoria Legal Award of Global Excellence from Australia for her contributions, creativity, and ingenuity in the legal space. To that effect, Kawthar was featured on Alumni Spotlight for August 2021 by Carrington Youth Fellowship Initiative and was widely published by several newspapers in the country.

In 2022, she was selected as the winner of the ELC Leadership Award for her diligence, excellence, the pursuit of social change, and leadership servant.

I admire the depth of Kawthar’s work, ambition, and self-awareness. I spoke with her about aspects relatable to her projects, activism, and her opinion on the political architecture of Nigeria. My conversation with her was fascinating as she shared her opinion and gave insights on aspects relatable to activism, law, and the political situation in Nigeria.

When did you embark on your journey towards societal change? What inspired you?

As far back as I could pronounce the word humanity, I realised something was wrong with it and needed change. I have been a victim of societal disorder, and in return, I want to right the wrongs.

In 2021, you were nominated as the winner of the Purvez Bilmoria Award, making you the second undergraduate of the University of Ibadan to clinch the award. What impact would you say winning such a prestigious prize had on you?

I would say winning the Purvez Bilimoria Legal Award of Global Excellence besieged me with a greater sense of responsibility to law and politics and my life. It has made me realise that what I am doing with social re-engineering matters, and doing more comes with a greater sense of preparedness and responsibility, which I am willing to take. I have had to study more to be better informed of the societal issues founded on faulty laws. And I want to go from here to learn more about politics, public policies, and good governance.

Winning the Purvez Bilimoria Award ignited my passion and made me an Oliver Twist. It sparked my thirst for more success. You know that feeling of winning and wanting to win all over again? That’s the impact. But most importantly, the award gave me a better sense of what changing the narrative for people around me means!

You graduated from one of the most prestigious universities in Nigeria with a law degree. I believe you know the law. If given a chance to amend the constitution, what would you change?

I will start with the expansion of men’s rights. So many laws restrict or gag the rights men are entitled to as Nigerians. First, chapter two of the constitution provides for economic, political, and social rights, which are non-justiciable. This is an aberration against humanity and should be amended. So many other amendments should be made, but let’s start with respecting human rights and holding ourselves accountable.

As a policy enthusiast, what is your idea of the political scenario in Nigeria?

It is a labyrinth full of dark, dirty hollows.

I read some of your very interesting essays and articles, and I found one of them to be highly intriguing. In your article, 21st Century Feminism: An Unnecessary Evil and A Misguiding Concept, you stated that “God did not create the world to be equal” and that “equality is an unrealistic dream.” Could you shed more light on these statements?

I never made any assertion to imply that men are superior beings to women. I tried to convey that men and women have their respective roles, which shouldn’t be blurred out in a quest for equality. Rather, both men and women should be treated justly and equitably. We can try to give what belongs to Caesar to Caesar, and the world will be chaotic.

I tried to inform the reader that we’d create unending wreckage in the human kingdom in our quest to pulverise the natural order of things. Men and women have different roles, and none of these roles is superior to the others. They are extremely important to the comfort of everyone. Without one, the other cannot live a sustainable life.

In your article, Injustice: The Most Lethal Dispossession of The Common Man, you emphasised the importance of democracy and the need to right the wrongs of this country. Based on your perspective, do you think democracy is being operated in Nigeria as it should?

Over time I have asserted that the system of government practised in Nigeria is nothing but a merger of so many systems. A system that practices democracy will have one symbol, “the respect for the rule of law, ” which is far-fetched in the country. If democratic principles are not upheld, we cannot say we operate in a true democracy.

You’ve been the coordinator of the Project Secure PVC for some time now, and you have continued to call upon people of legal age to get their Permanent Voter’s Card. How do you motivate your team and manage the performances of the people you lead?

Over the past nine months, I have worked with a team intrinsically motivated to change the social and political architecture and narrative of things in Nigeria. We have so far been on a bumpy ride. Therefore, even as the founder and coordinator of Project Secure PVC, I seek motivation from the team. It is a situation of iron sharpeneth iron. Furthermore, the situation of things is too devastating to take a walk alone. Community outreach and social work should be done with people who believe in the cause genuinely. Which is what I am doing.

On Twitter, I noticed that you’re called Àbèké. Is that your real name or a pen name? What prompted you to take it up?

It is a nickname I adopted from friends who preferred to call me that. Over time it overshadowed my original name, which I decided to keep unknown.

What is something you have learned over the years concerning politics and activism?

That there is a need to do more to salvage the epileptic situation of things in my country Nigeria. We need more agitated people than the average human to do better things. I have also identified that, above all, politics trumps everything! We may find ourselves in the finance and banking sector, the agriculture and social work sector or maybe the educational sector. Each of these sectors has laws guiding them. These laws will go to waste without humane legislation and genuine executors. I learned that our collective participation in the political process brings true national self-governance. We need to hold ourselves accountable! We need to know the law to obey the rule of law!