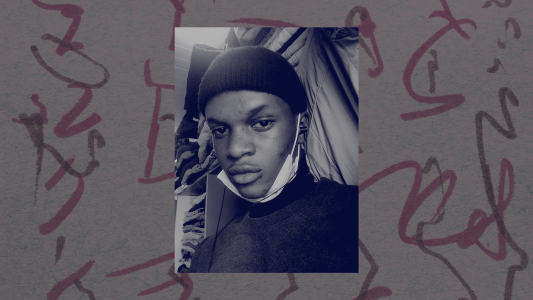 Herein, Chidera discusses his new poem, “How To Love A Boy For Whom Blue Is Not Merely A Color.”

Please walk us through the creative process for this poem.

I started to write this poem by the end of the year 2021. I can vaguely remember that I’d just finished watching a movie about suicidal people with my mother, and I asked her—with a solemnity that she said had frightened her at the time—”What would you do if I decided to kill myself?” As expected from the stereotypical African mother, she refused to answer. After relentlessly prodding, she said, “I will not agree.”

I was stunned at the time by the quiet strength in her disapproval of my alleged suicide. The ease with which she said ‘I will not agree’, as though death were a thing she could bend to her will, something she could coerce to give her son back.

It was a strangely inspiring moment, and I just picked up my phone and wrote the first lines: “The mother rejects his deadness.” By the end of the week, I’d already written a first (albeit rough) draft of the poem.

You explored the themes of motherhood and death in this poem. Could you share a bit about these and why it’s essential to write about them?

Motherhood and death are important themes that the work tries to encapsulate: a mother’s refusal to accept her child’s death, her resistance to the smouldering realities around her, and finally, her acceptance.

I tried, however, to be less explicit about the theme of death. Death, in the poem, is a sentient existence, a being that transcends the absence of life and yet it is without a corporal form, a thing that is ultimately powerful and yet still bows to the mother’s will.

However, the pivotal themes of this work are sadness and depression. Although the ideas of sadness and depression are fairly implicit, they are the central wheels that drive the entire work. The eponymous “boy” in the poem is intentionally painted as someone “for whom the kiss of life has lost its thrill”—an allusion to his suicidality and depression. Using the chromatic depiction of sadness, “blue” becomes a metaphor for the immense sadness that shrouds his life, the precursor to his eventual death, hence the title.

When did you begin to write poetry, and how did you discover it?

I like to think that I did not “discover” poetry. Poetry, like a living being on its own, found me.

At fourteen, I realised I was battling depression. Though I did not fully understand it at the time, my depression was triggered by my identity as a queer person and societal homophobia.

The poems began as stylishly covert and vague ways for me to announce my queerness lyrically in the pages of my school notebooks. Things like love letters that I could not openly write to the boys I crushed on became encoded puzzles of rhyming sentences, each one slowly reaffirming my queerness, slowly moulding my aliveness. Poems became a way for me to openly be myself and yet still be protected from the fury of societal homophobia.

What is your ultimate goal as a poet and writer?

As petty as it might sound, my goal as a writer is to disappoint the one woman who told me, after reading my amateurish gay retelling of Cinderella, in a voice full of malice, “This story is trash; nobody wants to read stories of sodomy.” That was my first ever literary rejection. If, at the same time, I also happen to leave a positive imprint on the lives of anyone with my work, then I will ultimately be fulfilled.