“All I have is a pen”: Hafsat K Abdullahi on the role of the creative in cultural revolution 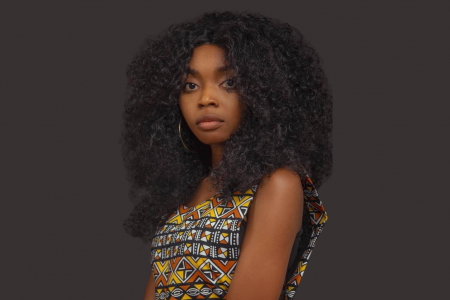 21-year-old Hafsat K. Abdullahi is a writer, award-winning spoken-word artiste, fashion designer, and model who is a member of Hill-Top Creative Arts Foundation and Enactus A.B.U.

She emerged as the overall Spoken Poetry Contest Winner at both the Abuja Literary Society Grand Slam and the Association of Nigerian Authors Slam. She also won the Fashion Killer of the Year in the contest organized by Indigo Fashion and Teen County Africa, she was awarded a tuition Scholarship at HIASFEST. She emerged as a finalist in an Oratory Competition organized by We inspire Africa in Lagos. In 2017, she emerged as the overall winner in the Nigerian Festival of Teen Artists Contest.

Hafsat has been featured in DailyTrust Newspaper, The Tanzanian Article, The Art MuseFair, For Creative Girls, Splendor of Dawn Poetry Channel, and Literature Voices (LitVo) to mention but a few.

Do you ever feel inferior as a Black person?

After listening to that question, I laughed because it was impossible on my part. When I was younger, I was conditioned to believe that the black colour symbolises something disapproving. Black is worn when people mourn, symbolising something dark, evil, and dreadful. White, on the other hand, is worn when people celebrate. However, I look in the mirror daily and appreciate what I see. I am proof of God’s inability to make worthless things. I am perfectly made as a human being and a Black person, and I will never feel inferior.

What is the significance of Black History Month to you, and how do you celebrate it?

I don’t use the word celebrate. Because to me, I don’t see it as a time of celebration. I see it’s more of a time of recollection, a time of reflection. Because I’m born in the 21st century, it’s easy to forget our roots in a generation with many distractions. Black History Month celebrates the Black people, the African people, both at home and in the diaspora. And this period gives me room to recollect Harriet Tubman, Martin Luther King, and the likes. All these people lived under the oppression of the white masters at a time, and they were able to stand victorious and create a voice for Black people today. Like Martin Luther King’s prophecy, a day will come when Black people will be free. And it’s something worthy. Black History Month helps us remember these people and appreciate them. The benefits their efforts give us today whereby Black people are bold enough to speak about their heritage and thoughts and feelings, especially as spoken word artists. Recollection of this past event helps someone like me, who was not present when the fight was intense, to appreciate the effort that gives birth to the freedom Black people experience today. Even though it’s not yet at its maximum, I can see to a reasonable degree that Black people are free. And it is a result of these people’s blood and sweat. I see Black History Month is a time of sober reflection, recollection, rethinking, counting my blessings, and a time of appreciation.

Do you ever imagine living in those times?

I’ve often imagined myself as a writer and a spoken word artist in those scenarios. No matter how much I read and research about these people, these brave and bold voices, these wonderful black people, I can never really relate because I wasn’t there. So most of the time, I try to create a mental picture, put myself in these people’s shoes, and see what I would do if I were someone like Harriet. What would have been my reaction? Would I have taken the bold steps as these people did? Or would I have just shied away and followed the crowd? I wanted to know. I had to relate to what I was writing about most of the time. I need to experience them. So I imagine myself mentally present in that era of slavery, with the cuffs on my hands, the assault on my skin, and the cold, harsh weather at night. And the probability of dying before I get to Europe, Portugal or wherever my slave traders/masters are to take me to. I imagine the scorching sun on the plantation while I work. Yes, I’ve imagined myself in those scenarios countless times. I have to, because I’m a writer.

Because of my research, I discovered that Black people were sold during the Middle Passage. The Middle Passage is like the exchange of whatever the Europeans brought in exchange for those enslaved people during the transport. And because of this Middle Passage, we found out that the people who accepted this merchandise in exchange for the Black folks were Black rulers who were willing to sell their people in exchange for the European merchandise. I learned from this Middle Passage experience that many people die before getting to Europe, Portugal, or whatever they were taking them to. So, yes, most spoken word artists always stress the fact that, yes, white folks enslaved us, brutalised us and did a lot of horrific things to us, but we should try to remember who sold us and delivered us to them. I think every Black individual should go back to this Middle Passage experience and read it again. It was our black leaders that sold us out for merchandise for weapons, for foreign things. We’ve had our likes for foreign things, not today.

How are you contributing to the fight against societal vices as a creative?

In one of my spoken-word pieces, I said, “All I have is a pen. No guns, no grenades.” I’ve always said that my voice and pen are the only things I have. And the only way I can fight is with those two weapons. Malala said that she doesn’t raise her voice to shout but to be a voice to those who cannot speak or are rendered useless by their voices. So she serves as a voice for people who cannot speak, and I want to serve as that figure too.

We are in the 21st century. You don’t need cuffs or chains to enslave people anymore. Still, the European culture has found its way into our culture and mentalities. It has dug so deep into our lifestyle that some people forget their heritage now, which is why Black History Month is very important. It takes us back. It gives us room to recollect, and it’s a time to think back to where we are coming from so that the labour of all these heroes will not go to waste and will not be forgotten. But how have I, in my way, tried? I’ve written pieces and will continue to write more to tackle these issues in my circle. That is my weapon.

As a fashion designer, you mostly use Ankara fabrics in your designs. What informed your choice of Ankara against other options?

I went for the Indigo Fashion Killa contest, which I won in 2021. There were lots of people that came to display all sorts of beautiful works. One even did an innovative outfit made of plastic, which is good. And she talks about reusing and recycling plastic so the ecosystem will be safe, which is a very noble thing she did. The theme of what I was wearing was ‘Local Girl’, made of the tank top and everyday miniskirts, which you’ll agree are adopted Western dressing. The miniskirt is not our dressing, the tank top is not our dressing, and the hand gloves are not our dressing, but I was able to recreate the miniskirt and the tank top in the African manner and rocked it.

But what was the idea behind all that? The idea is that even though we cannot do away with the fact that the European lifestyle and culture have sunk deep into our lifestyle and mentalities, why not bridge the two styles? Africanising the Western dressing.

Suppose I want to wear Palazzo pants. In that case, I make it in Ankara or any of our native attire, as in our tye and dye batik fabrics, to make it more African and exotic. My niche is to Africannise the Western culture that has been richly, deeply embedded into our lifestyle today. So that is the whole idea of my fashion niche and everything. And that was how I was able to win the Fashion Killa of 2021 by Teen County, Africa. And I was happy that people saw what I was seeing. And they supported the whole idea of Africannising the western culture here in Africa.

What’s been your greatest challenge as a creative?

Honestly, I’ve lost more times than I have won in competitions. But in the end, no one counts your losses. What they count are the wins. I’ve cried, been stressed up, and had sleepless nights. Spent a ridiculous amount of time writing. I’ve had writer’s blocks; I’ve had times when I feel so low. I’ve lost so much that I’ve gotten so used to losing that winning felt far-fetched. Yes, I won when I was a kid, I have won scholarships, and fashion shows, but in the end, no one knows what’s happened behind the curtains before we come up on stage.

Who are those black creatives you look up to?

In the spoken poetry world, The first person I would like to mention is Ebony Stewart. She’s an African American spoken word artist. Then there is Neil Israel. What captivated me the most about Neiel Israel was her vigour and voice. Her first spoken word piece I listened to is titled “When a Black Man Walks.” That piece gave me goosebumps. Her voice, passion, gesture, and everything about that piece was a masterpiece. Ebony Stewart is someone I look up to because of how many grounds she has been able to cover as a speaker. That is, she’s living off of her art as a spoken word artist. There is a popular belief that spoken word artists can’t find their arts lucrative. But that lady is living off her art, like, the only thing she does is spoken word poetry, and she’s making money out of it, and she’s made a living out of it.

In Nigeria, Dike Chukwumereji is one of the top spoken word artists I admire. And then I found Ms Wana Wana. Her content is out of this world. That woman is a genius. In fashion, I like Dumebi Iyama. She’s a Nigerian in the diaspora who is also involved in fashion. I share almost the same niche with Iyama because she celebrates the African prints, too.

What do you wish you could change about the world?

In truth, I don’t have one particular thing I want to change. Because there are a lot of things, I would want to change. I want world peace. I want to reverse the probability of global warming. I want all the SDG goals to be achieved. I want rape to stop. I want racism to stop. I want everyone to be free and accepted as humans, regardless of identity and gender. I want the world to be a much better place. There are a lot of almost impossible things I want for this world. I doubt I can single-handedly solve the world’s problems, but I will try my best.