A Step Back: Celebrated writer, scholar, and philosopher Es’kia Mphahlele 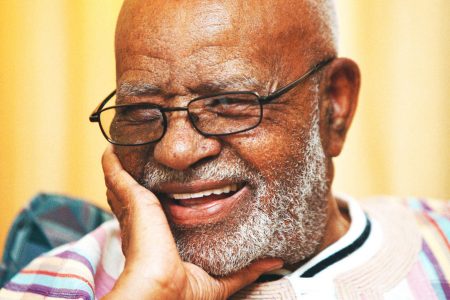 “There must surely be much more to be said than the mere recounting of an incident: about the loves and hates of my people; their desires; their poverty and affluence; their achievements and failures; their diligence and idleness; their cold indifference and enthusiasm….”

Ezekiel “Es’kia” Mphahlele is one of Africa’s most revered writers and scholars, known both for his literary works as well as for his activism in arts, cultural and educational matters. He was initially educated as a teacher, but after he spoke out against the inferior standards of “Bantu” education the apartheid government banned him from teaching anywhere in South Africa.

His name wasn’t always Es’kia. He was born Ezekiel Mphahlele in 1919 and he changed his name to Es’kia at the age of 58. Growing up in the slums of Pretoria, his writings bore the lives of his experiences in and out of South Africa to bear in on his short stories, and hence he developed African humanism (a philosophy which extols not only the good of the human person in general but also the good of the African person as the purpose of all actions).

His first of two autobiographies, Down Second Avenue, was written while he was exiled in Nigeria (where he worked with literary giants Wọlé Soyinka, Gabriel Okara, sculptor Ben Enwonwu and other colossal African artists) and it recounts his struggles to get an education, the setbacks during his teaching career.

Stratfield Jane described his text as serving as a source of fortitude…and also presenting the horrors of South Africa to the world. The book was at first rejected by US publishers who apparently thought the content too local, and the market overflowing with “too many books about Africa”. But since then it has become a standard book on US syllabi. It is his best-known work.

Mphahlele holds a literary catalogue of two autobiographies, more than 30 short stories, two verse plays and a number of poems. He is deemed the “doyen of African letters”. Also doubling as a teacher, Es’kia would see himself teaching at Higher institutions of learning in countries like Nigeria, Kenya, France and also the US.

He received numerous international awards during his lifetime such as the Order of the Palm (French government 1984), World Economic Crystal Award in 1998, and in the same year, the Order of the Cross was awarded to him by the then president, Nelson Mandela, the highest recognition granted then by the South African government.

He died on October 27th, 2008 in his childhood town Limpopo where he lived with his grandmother as a child. Significant streets in South Africa are still named after him.

A brief overview of Mphahlele’s life was published as an Odyssey of an African Giant here. In an interview with Chabani Manganyi, he shares how his childhood shaped his sense of place and people. The interview appeared in Bury Me at the Marketplace, a collection of Mphahlele’s letters. You can read an excerpt from the interview here.